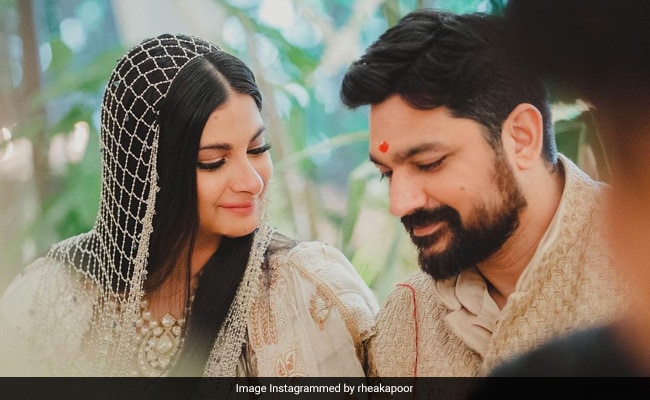 Rhea Kapoor always wanted to marry the love of her life in her living room and that’s exactly what happened on August 14. The producer-fashion designer got married to her longtime boyfriend Karan Boolani in a very intimate ceremony in the living room of her Juhu residence. She herself revealed this in her latest Instagram post on Tuesday. Sharing a new set of pictures of herself and Karan Boolani from their beautiful wedding, Rhea Kapoor wrote: “I wanted to run away and get married in my living room. Thank you for making that possible” and tagged Karan Boolani, as well as, caterers and photographers who covered her wedding.

On her special day, Rhea Kapoor wore a stunning ivory lehenga from the shelves of Anamika Khanna and paired it with jewelleries by her mom Sunita Kapoor. Check out her breathtaking photos from her wedding here:

Sharing the first photo from her wedding album on Monday, Rhea Kapoor wrote: “12 years later, I shouldn’t have been nervous or overwhelmed because you’re my best friend and the best guy ever. But I cried and shook and had stomach flips all the way through because I didn’t know how humbling the experience would be. I’ll always be that girl who had to come home to Juhu at 11 pm before my parents fell asleep. Only until now I didn’t know how lucky I was to feel torn. I hope we make a family so close that we have many, many loves of our life. Mine are Karan Boolani, Anil Kapoor, Sunita Kapoor, Sonam Kapoor and Harsh Varrdhan Kapoor forever more.”