Viral Pic Of Alia Bhatt And Ranbir Kapoor With A Fan 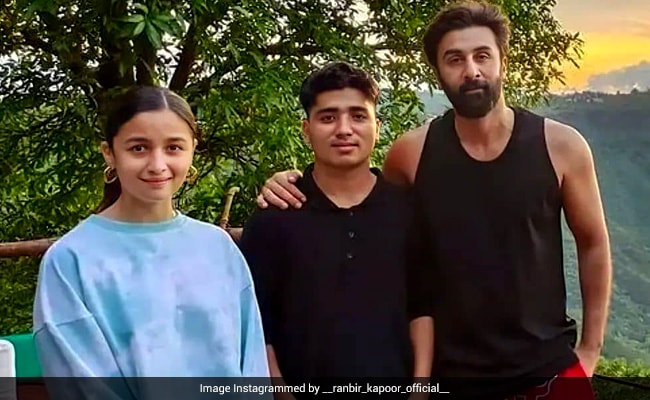 Alia and Ranbir with a fan. (courtesy __ranbir_kapoor_official__)

There’s hardly a week when Alia Bhatt and Ranbir Kapoor do not occupy a spot on the list of trends. The star couple is trending yet again for a picture which features them posing along with a fan. The photograph might be from the couple’s latest vacation. For Ranbir Kapoor’s 39th birthday, he and Alia Bhatt flew to Jodhpur. During their stay there, they went on a safari and even had a special date, glimpses from which Alia Bhatt shared on her Instagram profile. Other pictures were simply curated by the many fan pages dedicated to Alia Bhatt and Ranbir Kapoor.

Take a look at the aforementioned picture here:

On Ranbir Kapoor’s 39th birthday, Alia Bhatt shared a glimpse from their date in Jodhpur and she captioned it: “Happy birthday, my life.” See the post here:

During their Jodhpur stay, Alia and Ranbir went for a safari, a video from which was shared by several fan clubs on social media and went insanely viral.

Ranbir Kapoor confirmed his relationship with Alia Bhatt in an interview last year, where he referred to her as his “girlfriend” and said that if it weren’t for the pandemic, they would have been married. Fans of Alia Bhatt and Ranbir Kapoor will get to see them share screen space in Ayan Mukerji’s Brahmastra.

Other than Brahmastra, Ranbir Kapoor has shamshera, co-starring Vaani Kapoor and Sanjay Dutt, lined-up. He will also be seen in an untitled film with Shraddha Kapoor. The actor will also star in Sandeep Reddy Vanga’s Animal, with Anil Kapoor and Parineeti Chopra.