This Time, She Takes Over Amsterdam 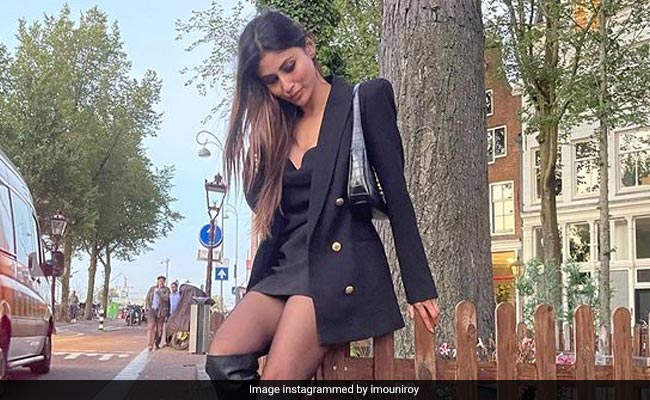 Mouni Roy is a jet-setter like no other. The actress, who is known for her acting and dancing skills, has been bitten by the travel bug like never before. Lucky for us, the actress has been documenting moments from her sojourns on social media, giving us a glimpse into her vacation diaries. Earlier this year, we saw Mouni Roy spending some quality time in London and Dubai. Now, her penchant for travel has taken Mouni Roy to the Netherlands. The actress has shared pictures from Amsterdam. Dressed in a little black dress, Mouni Roy looks glamorous as ever. The Naagin star’s caption read, “Transponded to the Dam.” Actor Karan Tacker spoke for all of us when he said in the comments section, “You are again travelling. I am very jealous.” Director Siddharth Malhotra said, “I love your life. This jet-setter that you are.”

A few weeks ago, Mouni Roy shared a throwback picture from the Maldives. Here, the actress is lounging by the beach, reading a book. Sharing the photo, she wrote, “It was hot outside and I was listening to some song indoors or was it a poem, ummm I forget. Dizzy dizzy.”

Also don’t miss this Reels where Mouni Roy is seen with the picturesque beach in the background. “Beach days = happy days,” she said in the caption.

We also love this “photo dump” that she shared from Odesa in Ukraine. In the set of pictures that Mouni Roy posted, she is exploring the city and visiting several quaint cafes in the area. Dressed in her fashionable best, Mouni looks stylish as ever.

Back home in India, we also saw Mouni Roy visit the Taj Mahal in Agra and she penned a note expressing her awe at the architectural marvel. Quoting poet Rabindranath Tagore, she wrote, “Like a solitary tear suspended on the cheek of time, an artistically expressed love.” Dressed in a saree, Mouni Roy said that she was saving it for “someplace nice.” She added, “What more wonderful than this magnificent giant of love and architecture.”

Mouni Roy is known for her work in shows such as Kyunki Saas Bhi Kabhi Bahu Thi, Devon Ke Dev…Mahadev and Junoon – Aisi Nafrat Toh Kaisa Ishq. She has also appeared in films such as Made in China, Romeo Akbar Walter and Gold. She will be seen in Brahmastra.