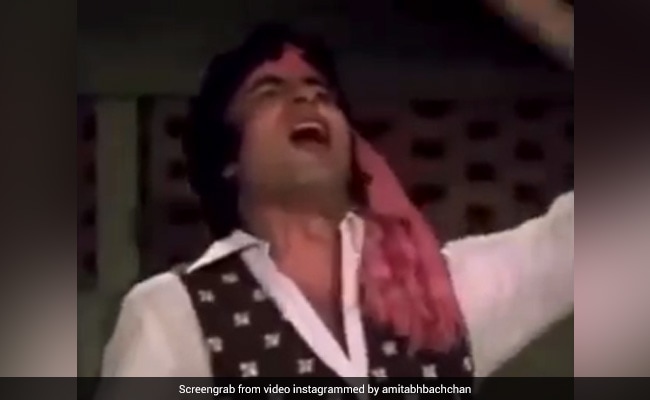 Big B in a still from the video. (courtesy amitabhbachchan)

There’s absolutely no denying the fact that Amitabh Bachchan’s social media is generally a delight. At 78, Big B is a true blue millennial at heart. The actor usually struggles with Internet terminology, millennial lingo, proper picture alignments (read cropping of heads) or just casual slang. This time, however, the actor did catch up with trends and shared a post with Aurora’s Runaway playing the backdrop. Oh, there’s a small twist to it BTW. The video features visuals from his evergreen track Khaike Paan Banaras Wala from the film Don while Runaway plays in the backdrop. He captioned it: “Kiya tha kya , kya ho gaya.”

Without much ado, take a look at his post here:

In terms of work, Amitabh Bachchan  has several film releases lined-up this year, which include Ayan Mukerji’s Brahmastra, co-starring Alia Bhatt and Ranbir Kapoor, and Chehre, alongside Emraan Hashmi. He will also be seen in the sports drama Jhund. The actor recently signed the Hindi remake of the Hollywood film The Intern, in which he will co-star with Deepika Padukone. Earlier, late actor Rishi Kapoor was meant to star in it. The original film features Robert De Niro and Anne Hathaway.