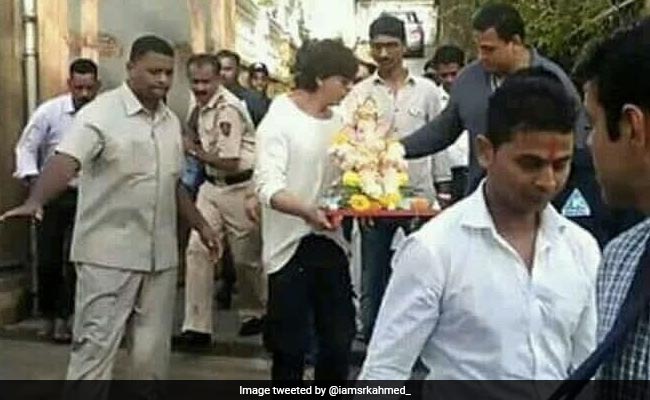 Like every year, this year too Shah Rukh Khan shared a picture from the Ganesh Chaturthi festivities at home. Posting a picture of a Lord Ganesha idol, the superstar wrote in his caption: “May Lord Ganesha’s blessings remain with all of us until we see him again next year… Ganpati Bappa Morya.” Last year too, SRK posted a picture from the celebrations at his home and he wrote: “Prayers and visarjan done… This Ganesh Chaturthi, may Lord Ganesha bestow upon you and your loved ones, blessings and happiness… Ganpati Bappa Morya.”

This what SRK posted on Ganesh Chaturthi this year:

In terms of work, Shah Rukh Khan was last seen in 2018 film Zero, co-starring Anushka Sharma and Katrina Kaif. He will next be seen in his much-awaited film Pathan, alongside Deepika Padukone. He has also co-produced Alia Bhatt’s Darlings, which marks her debut as a film producer. Besides that, he is also producing a film called Bob Biswas, starring Abhishek Bachchan in the titular role.

Shah Rukh Khan  married Gauri Khan in 1991. The star couple are parents to Aryan, 23, (their eldest child), Suhana and 8-year-old AbRam. Aryan Khan graduated from University Of South California. Suhana (21) is pursuing her higher studies in New York, while AbRam stays with his parents in Mumbai. Shah Ruk Khan’s daughter Suhana aspires to be an actor, just like him.