“The Best possible Choice I have Ever Made”: Karan Boolani On Marrying Rhea Kapoor 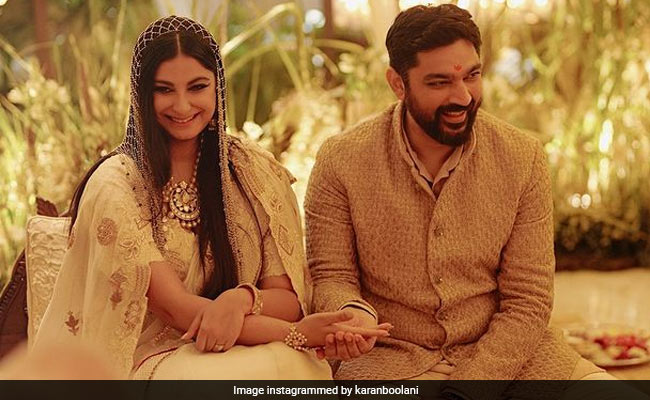 Film producer Rhea Kapoor and Karan Boolani’s wedding was a hush-hush affair but their declaration of love on Instagram was just the opposite of that. The couple, who got married at Anil Kapoor’s Juhu residence in the presence of a few family members, shared loved-up posts on their respective Instagram profiles after their intimate wedding. Karan Boolani shared a picture-perfect moment from the wedding and he wrote for Rhea: “Yesterday we made it official to the world… but you and I have been ride or die for over a decade and for that I would like to thank four people who have given me a crazy amount of love, respect, encouragement and constant collaboration.”

In his loved-up note for wife Rhea Kapoor, he added, “First is a film producer, the second is a fashion stylist… The third is the mother of my daughter Lemon and the fourth is the finest cook to have performed miracles in a domestic kitchen… And their names are Rhea Kapoor. To the best decision I’ve ever made. Here’s to us and everything that awaits us together.” Rhea Kapoor is a film producer, a stylist, a self-confessed foodie and brilliant cook (her dad Anil Kapoor and friend Kareena Kapoor are fans of her culinary skills).

Rhea Kapoor too shared a loved-up post a few days after her wedding and she wrote in it: “12 years later, I shouldn’t have been nervous or overwhelmed because you’re my best friend and the best guy ever. But I cried and shook and had stomach flips all the way through because I didn’t know how humbling the experience would be. I’ll always be that girl who had to come home to Juhu at 11 pm before my parents fell asleep. Only until now I didn’t know how lucky I was to feel torn. I hope we make a family so close that we have many, many loves of our life.”

Apart from being a film producer, Rhea Kapoor is also a stylist (largely for her sister Sonam Kapoor). She has co-produced films such as Aisha, Khoobsurat and Veere Di Wedding, all three starring Sonam Kapoor. The sister-duo also runs an apparel brand called Rheson, which was launched in 2017. Karan Boolani worked as an assistant director with Rhea Kapoor on the 2010 film Aisha.