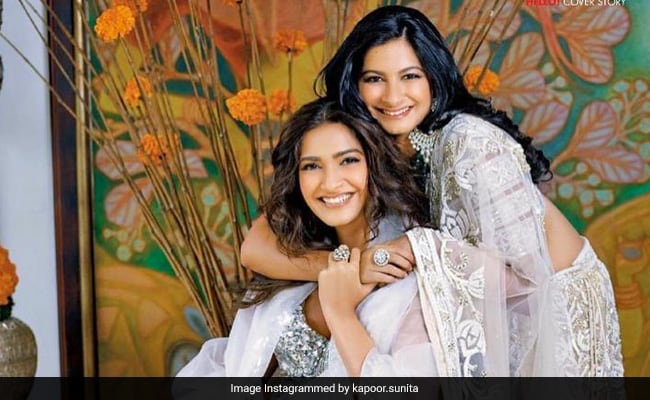 It is a well-known fact that Anil Kapoor and his family are extremely close-knit. This is evident from the social media handles of the actor and his wife,  jewellery designer Sunita Kapoor. Even their children, Sonam Kapoor, Rhea Kapoor and Harshvardhan Kapoor do not hesitate from showering their love on each other on social media. The latest proof of this came from Sunita Kapoor’s Instagram timeline as she shared a stunning image of her two daughters. In the photo, both Sonam and Rhea are dressed in traditional clothes. While Sonam is seated, Rhea, who is standing, is seen hugging her sister.

And like all doting mothers, Sunita Kapoor could not but help express just how special and important her daughters are to her. Her caption is all things lovely as she wrote, “Daughters are the most beautiful gift this world has to give.” The image soon caught the eye of other members of the Kapoor family. Anil Kapoor dropped a heart emoji in the comments section, as did his brother, actor Sanjay Kapoor.

Sunita Kapoor’s Instagram timeline is all about her family. On the occasion of Rhea Kapoor’s wedding last month, she shared a photo of the happy couple. She wrote, “14.08.2021. To my princess and my son Karan. Love is just a word until someone comes along and gives it meaning. I wish you both never stop being amazed by each other, and never stop falling in love with each other. May your life and home be always filled with happiness. Love you both.”

Entrepreneur Anand Ahuja, who is married to Sonam Kapoor, spoke for all of us when he replied saying, “Wow”. Rhea Kapoor responded to the image, saying, “Love you, mommy,” while Karan Boolani left heart emoticons. Sanjay Kapoor said, “Lovely picture.”

On her son-in-law, Anand Ahuja’s birthday, Sunita Kapoor penned a heartfelt note. She wrote, “Happy happy birthday to an amazing son. May everything that makes you happy be yours today, tomorrow and always. We love you so much.”

Anil Kapoor and Sunita Kapoor have been married since 1984. In terms of work, Sonam Kapoor was last seen in AK vs AK, while Rhea Kapoor has produced three films – Aisha, Khoobsurat and Veere Di Wedding – all starring Sonam.