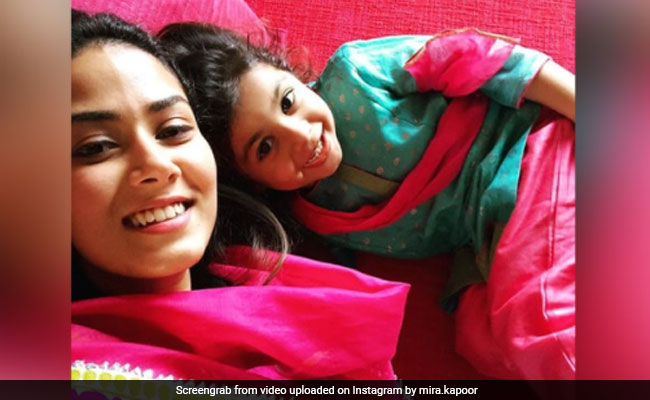 Shahid Kapoor and Mira Rajput’s daughter Misha turned 5 last month and her birthday was all about “rainbow, bright colours and less complicated décor.” Yes, that’s what Mira wrote in her latest post, where she shared glimpses of Misha’s birthday celebrations in “technicolour.” Mira also revealed how she “reduced the decor fuzz” for her daughter’s birthday party this year. “Life in Technicolour. This year M’s birthday was all about rainbow, bright colours, and less complicated decor! Last year I was super excited to be a DIY party planner. Two birthdays and a year later, all I can think of is arriving at the birthday like a guest! I reduced the decor fuzz and switched it with fun lights instead that were easier to handle and use in many ways (and later too),” wrote Mira.

She also listed the places from where she got the party supplies: “I picked up a fresh set of theme-specific rainbow plates and napkins for cake from Party A La Carte and stuck to the bamboo ones for party grub. And I found a super convenient website ThemeMyParty that delivers very well priced theme-specific party supplies including straws, sandwich toppers, the backdrop, paper lanterns and colour coordinated balloons. We had popcorn from the popcorn containers leftover from last year and the rest of the snacks laid out for kids to dig in in mix-n-match crockery. My mom made her signature sandwich house: how many of you had them at your birthdays in the 90s? I always lay out the table before the party itself so there’s less madness later. I love this table cover and the crockery from this set (not used here) is equally lovely.”

“The rainbow fringe, rainbow wrapping and a devilishly convenient balloon machine was from Amazon. Of course the alphabet lights brought it all together (and I’ve ordered an extra Z and N so we can make a Zain out of the Misha) along with the most fun prizes and party favours. Dog & the bone, Lemon spoon race and treasure hunt for all ages was too much fun. I think the adults enjoyed it a lot more than the kids. The cake was DIVINE. Vanilla cake with chocolate mousse filling instead of buttercream,” Mira wrote in the caption and added: “I’d love to know how you all are celebrating kiddie birthdays cause I am ready to retire and I have another one in 4 days!”