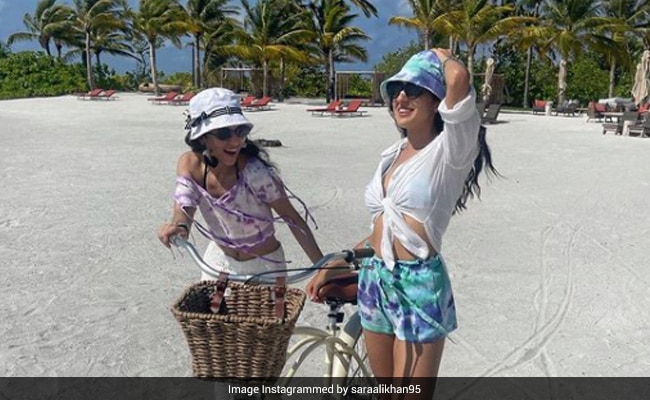 Sara Ali Khan didn’t forget to add the element of Sara-ness to her latest Instagram post. The 26-year-old actress shared a series of pictures from Maldives with her bestie and she added an adorable caption to go with it. She wrote: “Aasma ki bulandiyon pe naam ho aapka, chand ki dharti par mukaam ho aapka. Hum to rehte hain chhoti si duniya mein, par Ishwar kare sara jahaan ho apka.” She added in her note, “Happiest Birthday my pretty best friend. Thank you for being my Sara and my Sahara.” She added the hashtags #twinning, #soulsisters, #live, #laugh and #love to her post.

Sara checked into Maldives with this stunning picture and she wrote: “In the expectation of wonderful things to happen in the future, one doesn’t hear the sound of the wind and sea, the breath and heartbeat this instant.”

Sara, who made her Bollywood debut in 2018, has featured in films such as Kedarnath (her debut film), opposite late actor Sushant Singh Rajput, Simmba, co-starring Ranveer Singh and Love Aaj Kal with Kartik Aaryan. Sara’s upcoming project includes Atrangi Re, co-starring Akshay Kumar and Dhanush. She was last seen in the Coolie No 1 remake, co-starring Varun Dhawan.