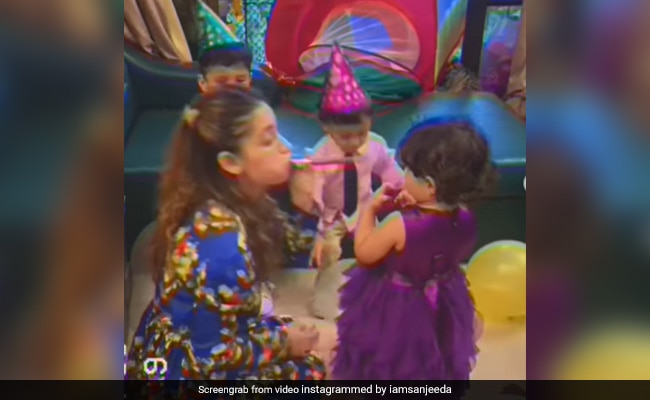 Sanjeeda Shaikh and her daughter in a still from her clip. (Image courtesy: iamsanjeeda)

Sanjeeda Shaikh’s little daughter Ayra turned two on Monday. The actress hosted an adorable and fun-filled party for her little munchkin, glimpses of which she even shared on social media. Sanjeeda Shaikh was married to actor Aamir Ali, with whom she co-starred in the 2007 TV show Kya Dill Mein Hai. They welcomed daughter Ayra in 2019. On Monday evening, Sanjeeda Shaikh shared a couple of boomerangs on Instagram from little Ayra’s birthday party. She can be seen having a whole lot of fun with her daughter in the clips. “I will celebrate you and me every day,” the actress wrote in the caption and added: “Ayra (heart icon) SS (Sanjeeda Shaikh).”

In a separate post, Sanjeeda Shaikh posted a video of her daughter and wished her with this heartwarming note: “Happy birthday to my gurl who taught me more about myself and the world. Thank you for showing me the right path.”

Aamir Ali also wished his daughter on social media. Sharing a video of themselves, he wrote: “Happy birthday my little angel…Lots and lots to write, but she can’t read, so I won’t write much… it’s between us. Just sharing a small celebration we had this morning…thanks for being there in my life my Ayra.. #jaan #happybirthday #life #love.”

Sanjeeda and Aamir also participated in the popular dance reality show Nach Baliye in the year 2007. Sanjeeda was last seen in the 2020 film Kaali Khuhi. Before that, she starred in the 2018 film Nawabzaade while Aamir’s last show was Navrangi Re!.