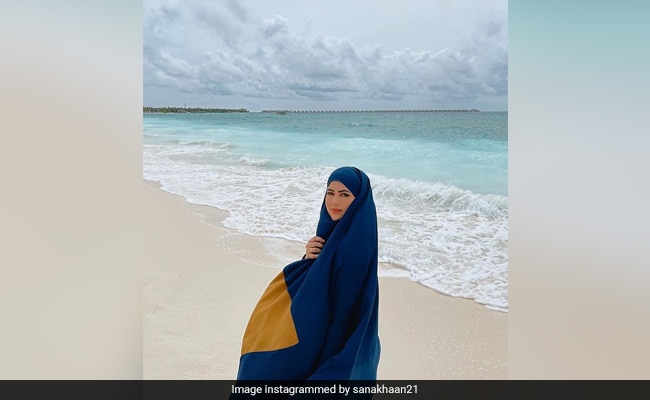 Former actress Sana Khan, on Wednesday added another picture from her Maldives vacation to her travel diaries on Instagram. The former Bigg Boss contestant has been in Maldives for a holiday with her husband Anas Saiyad since the beginning of this week. The new picture from Sana Khan’s vacation features her posing on the beach. She can be seen standing against a picturesque backdrop of the sea and a cloudy sky. The view of the entire picture is as majestic as it gets. Sharing the picture on Instagram, Sana Khan wrote: “Only if I could explain in words how vibrant this island is.” Sana’s post received scores of comments from her Instafam who dropped heart emojis in the comments section of the post.

The former actress has appeared in several Tamil, Telugu and Hindi films. Some of her credits include Jai Ho, Wajah Tum Ho and Halla Bol. She was last seen in the web-series Special OPS. Sana was also a part of the season six and seven of the reality TV show Bigg Boss.