Sameera Reddy’s Dad Requested Why She “Is not’ Masking Her White Hair.” She Had The Very best Answer 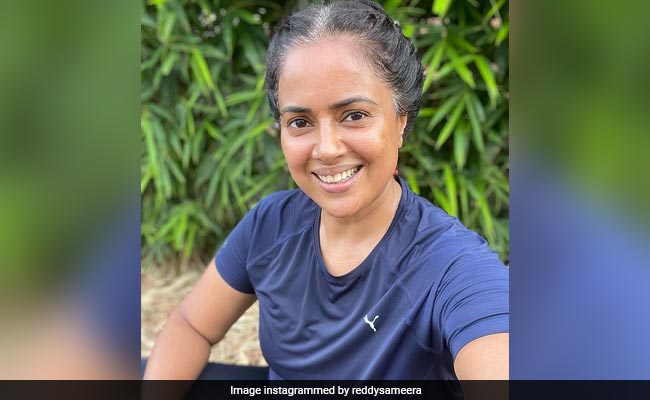 Sameera Reddy, who has been promoting body positivity for the past two-three years, had a conversation about her white hair with her dad. Her father, “worried about people judging her,” asked the actress why she “isn’t covering her white hair,” to which Sameera Reddy said that she is not “paranoid” about her look anymore and now she takes her own “sweet time and chooses to colour if and when she feels like.” The actress posted two pictures of herself on Tuesday and shared what she told her father about “self-love” and “acceptance.” She can be seen sporting partially white hair in the pictures, sharing which she wrote: “My dad asked me why I’m not covering my white hair. He was worried about people judging me. I answered ‘So what if they did… Did it mean I’m old? Not pretty? Not groomed? Not appealing?’ I told him that I’m not paranoid about it like I used to be and that freedom is liberating.”

She added: “I used to colour every 2 weeks so nobody could catch that line of white. Today I take my own sweet time and choose to colour if and when I feel like. He asked me why I should be the one to change the conversation? I said why not? I know I’m not alone. The shift and acceptance only begin when old thought processes are broken. When we can just let each other be. When confidence can just find its way naturally and not hidden behind a mask or cover. My dad understood. As I understood his concern as a father. Every day we learn we move forward and we find peace in small shifts. And it’s those small steps that take us to much bigger places #happiness #acceptance #selflove #imperfectlyperfect.”

We hear you, Sameera Reddy, loud and clear.

Sameera Reddy married businessman Akshai Varde in a traditional Maharashtrian wedding in 2014 and the couple welcomed son Hans Varde in 2015 and Nyra in 2019.

On the work front, Sameera Reddy was last seen in the 2013 Kannada film Varadhanayaka.