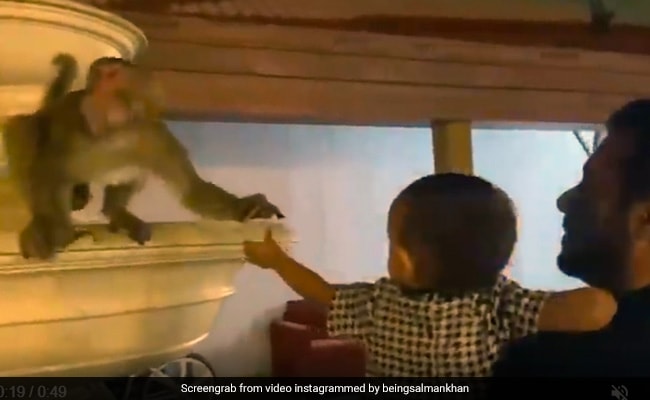 Salman Khan and Ayat in a still from his video. (Image courtesy: beingsalmankhan)

In case you are having a bad day, Salman Khan‘s latest entry on Instagram will cheer you up. The actor, on Thursday, posted a video of himself and his little niece Ayat and it is the cutest thing you will see on the Internet today. Salman, who often feeds monkeys during his film shoots, did something similar recently but this time, he was accompanied by his niece. In the video, he can be seen holding little Ayat in his arms and helping her feed monkeys. Sharing the clip, the actor wrote: “Monkeyyy.” Within minutes, the video started trending on social media. Check it out here:

Salman Khan shares his birthday with his niece Ayat, who was born on December 27 in 2019. Soon, the actor will turn 56 and Ayat will celebrate her second birthday.

In terms of work, Salman Khan has Tiger 3, Kick 2, co-starring Jacqueline Fernandez, and Antim: The Final Truth lined up. He co-stars with his brother-in-law Aayush Sharma in Antim. The actor was shooting for Tiger 3 with Katrina Kaif in Russia and Turkey earlier this year.

Salman Khan was last seen in Radhe: Your Most Wanted Bhai. The film premiered on an OTT platform and was poorly received by the cine-lovers. In his review for NDTV, film critic Saibal Chatterjee gave time two stars out of five and wrote: “time has enough inducements for diehard Salman Khan fans to keep them interested in the goings-on. The star does everything that they would expect of him, including shedding his shirt. For all others, there is Randeep Hooda.”