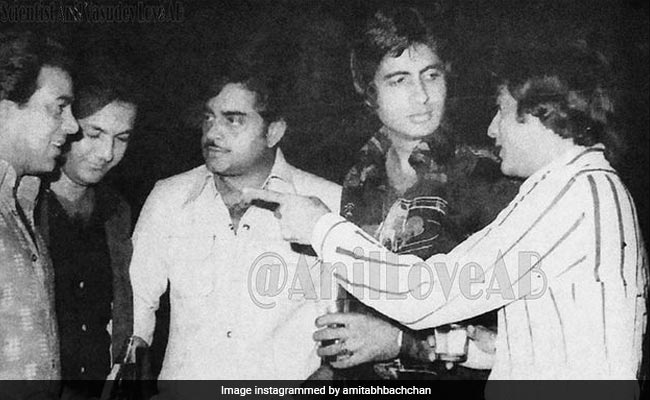 Amitabh Bachchan, in a throwback mood, posted a gem of a photograph on his Instagram profile on Friday night. He didn’t say when or where the picture was clicked but we simply love it. The pictures features some of the biggest Bollywood stars, including Amitabh Bachchan, Shatrughan Sinha, Dharmendra, Prem Chopra, and Jeetendra in a single frame. The veteran actor, in his caption wrote: “Jeetendra .. Dharmendra .. Prem Chopra .. Shatrughan Sinha .. and moi… Aajkal aise jamghat bahut kam dekhne ko milte hain.”

Needless to say, Amitabh Bachchan’s Instafam loved his post and flooded it with comments like, “all legends in one frame” and “what a shot.” Another comment read, “Best pic ever.” Take a look at Big B’s post here:

Amitabh Bachchan has a treasure trove of throwbacks. See some of his posts here:

In terms of work, Amitabh Bachchan was last seen in Chehre, alongside Emraan Hashmi.He has several film releases lined-up this year, which include Ayan Mukerji’s Brahmastra, co-starring Alia Bhatt and Ranbir Kapoor, He will also be seen in the sports drama Jhund. The actor recently signed the Hindi remake of the Hollywood film The Intern, in which he will co-star with Deepika Padukone. Earlier, late actor Rishi Kapoor was meant to star in it. The original film features Robert De Niro and Anne Hathaway.