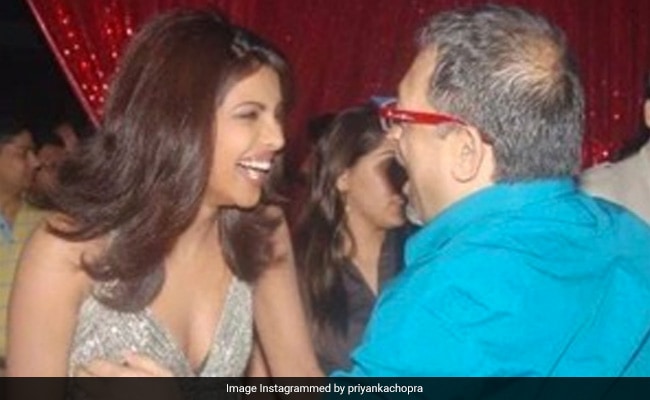 A throwback of Priyanka with Pradeep Guha. (courtesy priyankachopra)

Film producer Pradeep Guha died in Mumbai’s Kokilaben Dhirubhai Ambani Hospital on Saturday. The late producer’s wife Papia Guha and son Sanket Guha shared the news of his death in a statement issued to the media, reported news agency PTI. “We regret to announce the sad demise of our dear Mr Pradeep Guha. In these COVID times the family has requested to be allowed to grieve in private and will share a date for a prayer meeting in a few days. No condolence visit at home due to COVID restrictions. Please keep him in your prayers,” the statement read. Stars from the Hindi film industry remembered the film producer on social media. Priyanka Chopra, who met him during her pageant days in the year 2000, described him as her “mentor” and she wrote an emotional note.

An excerpt from Priyanka Chopra’s note read: “You were always my forever champion. Your random calls of encouragement, your zest for life and your ambition was something I have always admired so much. This loss is so personal. I will miss your voice and strength so much. I’ve had very few constants in my life and outside my parents, you were one that I truly saw as my mentor. You saw something in me I never knew I had. You never shied away from reminding me on how I could be better. You always lead with charge.” She added, “I’ve learned so much from you PG. With such a heavy heart I say a final goodbye to a huge constant in my adult life. I’ll miss the laughter, the gossiping, the stories, the encouragement. Will keep striving to make you proud. Picture abhi baaki hai.”

Former beauty queen Lara Dutta too paid tribute to Pradeep Guha and she wrote: “My dearest PG, you were always the king who was the most successful ‘Queen maker’. May we, your protégés always keep your memory alive and shining bright and may you always watch over us as you have always done. RIP.”

Dia Mirza, recalling an incident from her Miss Asia Pacific days, wrote: “I will never forget that car ride as he dropped me off to the airport as I left the country to represent India at the Miss Asia Pacific. “What if I lose?” I had asked him and he said “It will be their loss. You are a winner.” Those words were everything. They gave the 18 year old me so much strength. And over the years he stood by me. Through good times and bad.”

Neha Dhupia, who was also mentored by Pradeep Guha during her Miss India days, wrote an emotional post remembering him. “I still remember the first day I stepped foot in Mumbai with dreams in my eyes of becoming Miss India and I had , had a brief meeting with you guys which was nerve racking and witty before that during the audition round in Delhi … Our beloved Pradeep Guuha, who knew that life with its twists and turns would get us so close … It feels like yesterday, every life lesson you taught me I have carried forward till today , every time I would see you or call you , you only added value in my life … your loss will take a long time to process ,” she wrote.

Pradeep Guha had backed the film Fiza, starring Hrithik Roshan and Karisma Kapoor. He had also produced 2008 film Phir Kabhi, starring Mithun Chakraborty and Dimple Kapadia. He had over four decades of experience in the fields of media, advertising, marketing and branding.