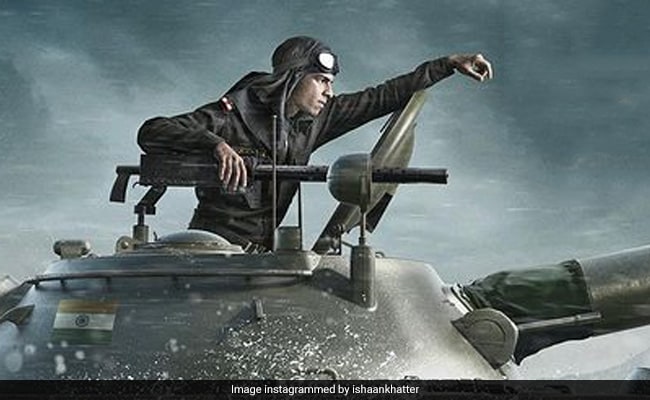 Pippa: Ishaan Khatter on a promotional poster of the film. (Image courtesy: ishaankhatter)

Ishaan Khatter, on Wednesday, shared his first look as Brigadier Balram Singh Mehta in Raja Krishna Menon-directed film Pippa and made his family and friends go wow. Pippa is set against the 1971 India-Pakistan war and the tank battle film is based on Brigadier Balram Singh Mehta’s book titled The Burning Chaffees. The film, co-produced by RSVP and Roy Kapur Films, also stars Mrunal Thakur, Soni Razdan and Priyanshu Painyuli and its shooting starts today. In the first look poster shared by Ishaan Khatter, he can be seen sporting a black uniform of the Armoured Corps of Army and standing in a tank.

“This is going to be special. ‘Shooting’ begins for our #Pippa! Godspeed,” wrote the actor sharing the first look poster. In the comments section, his brother and actor Shahid Kapoor commented: “Ohooo, looking good” while Ishaan’s dad Rajesh Khatter wrote: “Break a leg kid.” Katrina Kaif, who co-stars with Ishaan in Phone Bhoot, commented: “So exciting” and actresses like Neha Dhupia and Huma Qureshi dropped heart and fire icons in the comments section.

Soni Razdan’s caption for the poster of the film read: “Thrilled to present the first look of Ishaan Khatter as the valorous young squadron leader #BrigadierBalramSinghMehta in #Pippa! Shoot with the troop begins today!”

Brigadier Balram Singh Mehta is a veteran of the 45th Cavalry tank squadron, who fought on the eastern front during the 1971 Indo-Pakistan War, resulting in the liberation of Bangladesh.

On Wednesday, team Pippa also invited Balram Singh Mehta to commence the shooting of the film.

Speaking about the film, director Raja Krishna Menon said in a statement: “I’m beyond excited to venture into the field with our amazing cast and crew. We’ve all been prepping hard for this day, and I cannot wait to bring this incredible story of valour and liberty to the audiences.”

The Batman Rumored To Be Getting 2 Extra Spinoffs