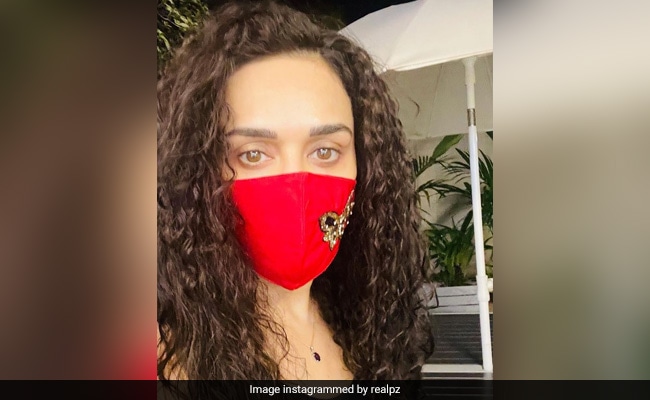 Preity Zinta is back to win our hearts with a beautiful hair makeover. She recently surprised fans with a new hairstyle that made us nostalgic. She gave her wavy hair a break to go back to the good old curly hair days. In a series of snaps, we can see hairstylist Adhuna Akhtar helping Preity bring this change to fruition. The actress was clicked in a salon with hair tied up in perm props. Preity Zinta’s curly hair look reminded many of her character, Shalini from the film Dil Chahta Hai which was made 20 years ago.

In her Instagram caption, Preity Zinta thanked Adhuna, who gave her the iconic look in the film, for styling her this time as well. In the image, she said that it was a new role that had led to the new look. “It’s always exciting to create a new look for a new character. It’s also nerve-wracking when you fundamentally change your hair and your vibe, therefore this is an appreciation post for Adhuna.” Preity also hinted at this look staying around for a long time by adding, “Here’s to bringing back the perm and restarting my love affair with curls.”

Preity Zinta showed off the curls in her freshly uploaded selfie. She also wore a designer red mask in order to follow the COVID-19 protocols.

A fan commented, “Dil Chahta Hai vibes all over again,” while another said that the look reminds people of Shalini.

She also shared another image of the new look and we are in love.

Preity Zinta earlier shared a montage of her beloved character from Dil Chahta Hai. The actress wrote in the caption, “I remember Farhan Akhtar telling me that whenever he makes a film, he would love for me to be a part of it. A few months later, we signed on for Dil Chahta Hai and we had so much fun on set. I told Farhan on the first day of the shoot, that this will be a cult film and he laughed at me. Today after all these years I’m so proud of the film we made. I have so many fond memories from the shoot and always have a big smile on my face when I remember those mad days.”