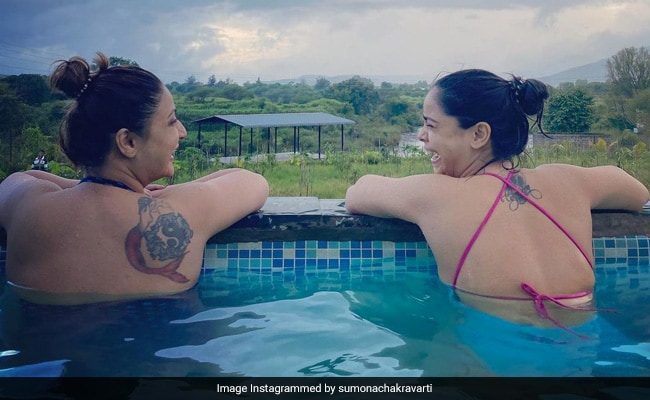 TV star Sumona Chakravarti managed to scoop some time out of her busy schedule and spent some time with her friends. The actress posted a set of pictures from her pool time. Sumona Chakravarti was joined by Urvashi Dholakia and TV actress Tarana. The pictures from the trio’s pool sessions are all things nice. The actresses, dressed in swimwear, can be seen smiling with all their hearts as they chill in the pool. Sumona captioned her Instagram post: “Laughing away the blues. Shuttu Guddu Chotu (go figure whose who).” She added the hashtags #lifelines, #myvibe and #mytribe to her post.

In an Instagram post earlier this year, Sumona Chakravarti revealed “something I’ve never shared before.” She wrote: “I have been battling endometriosis since 2011. Been in stage IV for the past few years now. A good eating habit, exercise and most importantly no stress is key to my well being,” adding: “The lockdown has been emotionally hard for me.”