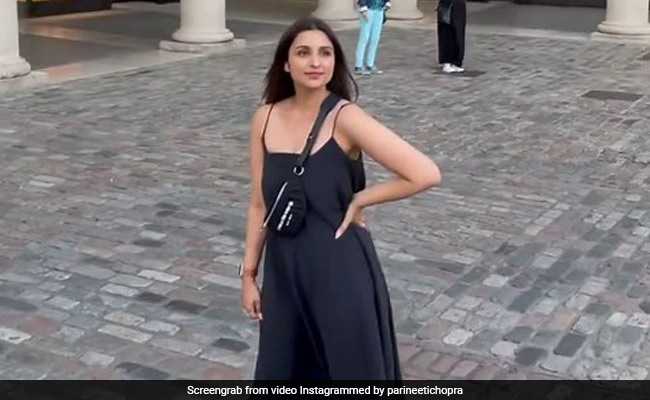 Actress Parineeti Chopra has cracked the code to winning the Internet with her social media game. When she is not engaged in making us laugh with her fun interactions with fans, she is making our jaws drop with some stunning pictures and videos. And given how effortlessly charming she is, we are sure all of it comes easy to the Ishaqzaade star. And proof of this is a new video that the actress shared, posing for the camera in the middle of the street, looking like a true Bollywood diva. Dressed in a long black dress, with sports shoes and a fanny pack, Parineeti had us reaching for a pen to take notes.

As always, Parineeti Chopra  kept it real by sharing with us the bloopers from the shoot. In it, the person handling the camera can be heard saying, “One minute,” while the camera moves around in a haphazard manner. Parineeti is also seen trying to tame the dress that was flowing with the wind. People in the area could not help but stop and stare at the stunner as she struck a pose. And, given how stunning Parineeti is, we aren’t surprised they stopped for a second look. Reacting to the video, Parineeti’s brother Shivang Chopra joked, “Looks like my photography skills.”

Parineeti’s banter with her brothers is too good to miss and luckily for us, most of it happens on Instagram. We recently got a glimpse of this on the occasion of Raksha Bandhan when the actress shared some throwback images on the photo-sharing app.

Along with the images, she wrote, “My rakhi post as late as their rakhi gifts. Where dem at? Sahaj Chopra, Shivang Chopra.” Referring to her hairstyle, she said, “Yes, I see my haircut. Answers in my stories,” where she explained that she was given a “katori cut” as a child. The hairstyle resembles a bowl, hence is colloquially called katori (bowl)cut.

Responding to the image, Sahaj Chopra said, “My rakhi gift to you is my lovely presence in your life.”

Parineeti Chopra was last seen in the film Sandeep Aur Pinky Faraar along with Arjun Kapoor. She will be next seen in Sandeep Reddy Vanga’s Animal with Ranbir Kapoor, Anil Kapoor, and Bobby Deol.