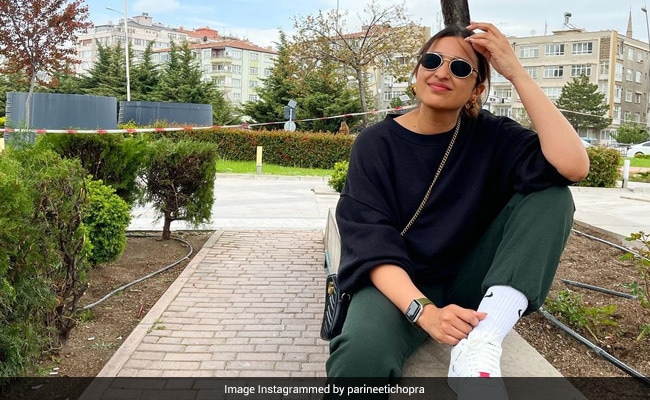 After five months away from home, Parineeti Chopra is embracing Mumbai life to the fullest. Guess what has added to her fun? The actress is back behind the wheel and she can’t be more excited as she whizzes down the roads. Parineeti’s recent Instagram post reveals that the Ishaqzaade actress loves to drive and doesn’t turn down any opportunity to take control of her car. However, Parineeti complains that she “seldom” gets the chance to drive herself as most of her travels happen through flights. In the video, Parineeti is seen driving a car and focussing on the road. She pulls down her mask after a while and keeps vibing with the viral Sinhalese song Manike Mage Hithe. We see the blue sky with patchy clouds above and we know there can’t be a better day to drive oneself through the city.

But Parineeti Chopra has an important point to make. She almost shouted out in her caption that “girls drive better than boys”. Give it a read, “I drive every opportunity I get. Which is very seldom because I’m on planes usually… (Also – Girls drive better than guys) Ok, bye. Dropping the mic and leaving you guys to argue.” The devil face and ROFL emojis bring to us Parineeti’s signature fun vibes. She also added the hashtag “My Happy Place”.

Parineeti Chopra got back to Mumbai only two weeks ago. She relished the feeling of homecoming on her very first car ride while returning home. In the video, Parineeti is jutting her head and shoulders through the car window and letting the night air brush against her face and hair. Parineeti can’t hold back her smile as she speeds through the empty streets in her car. “Back home after five months. Had to breathe it in a real way,” she wrote in the caption. The actress added, “There’s no place like Mumbai” along with a hashtag saying “home”.

Parineeti Chopra was last seen in Sandeep Aur Pinky Faraar opposite Arjun Kapoor. She will next feature in Animal, which also stars Ranbir Kapoor, Anil Kapoor and Bobby Deol.