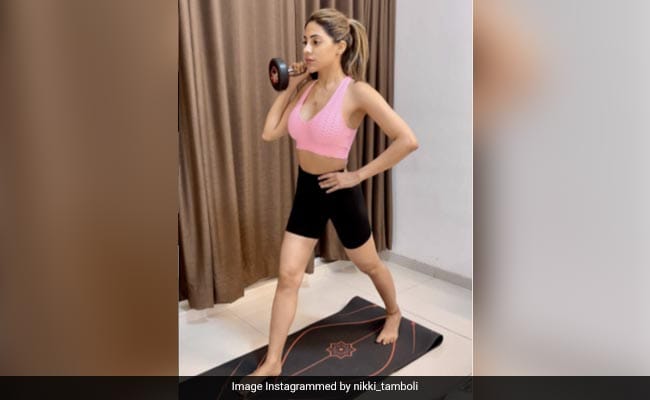 Nikki Tamboli in a still from her video (courtesy nikki_tamboli)

Nikki Tamboli is setting major fitness goals on Instagram – have you seen her work out video yet? The 25-year-old actress posted glimpses of her leg day routine on Instagram and all we can say is it looks rather intense. In the video, Nikki Tamboli, dressed in trendy athleisure, appears to be working out at home. As her work out gear, she simply has a kettle bell and a yoga mat. The Bigg Boss 14 star added a rather ROFL caption to her post, which sort of explains the aftermath of an intense leg day work out. Borrowing lyrics from Jay Z’s song 99 Problems, Nikki Tamboli added a touch of her own and wrote: “I got 99 problems and all are my sore muscles.”

Nikki Tamboli indeed has a reputation for being a fitness enthusiast, proof of which lies in glimpses of her performing stunts on Khatron Ke Khiladi 11.

Earlier, Nikki Tamboli had set Instagram on fire with glimpses of her Cape Town diaries, where she was shooting for Khatron Ke Khiladi.

Nikki Tamboli, an actress and a reality TV star, has participated in shows such as Bigg Boss 14 and Khatron Ke Khiladi 11. Earlier this year, Nikki Tamboli lost her brother to COVID-19, soon after which she flew off to Cape Town for Khatron Ke Khiladi 11. Clarifying her decision to join the show, Nikki wrote in an Instagram story: “…if I have to choose between these, there’s no other option my family comes always first but my family, my parents, my dad always told me to go live your dreams: ‘Go achieve it, because trust me your brother will be the most happiest watching you fulfil your dreams’.”