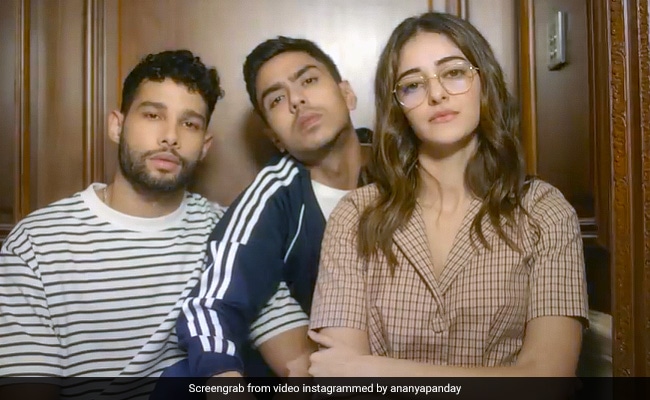 Kho Gaye Hum Kahan is the title of a new film, to be produced by those whose favourite theme is exploring the various facets of friendship in movie. We are talking about Zoya Akhtar, who owns Tiger Baby Films with Reema Kagti, and brother Farhan, who is part of Excel Entertainment along with Riteish Sidhwani. Kho Gaye Hum Kahan stars newbies such as Ananya Panday, Siddhant Chaturvedi and Gourav Adarsh and marks the directorial debut of Arjun Varain Singh (PS – Ananya and Siddhant are also co-stars of an upcoming Shakun Batra movie). On Thursday, the cast and crew made the film announcement with a first look teaser and poster. The teaser is set to the song Kho Gaye Hum Kahan from Baar Baar Dekho, which was co-produced by Farhan Akhtar.

The theme of friendship was introduced with these words: “Find your Friends and you won’t need followers.”

The Kho Gaye Hum Kahan teaser is basically a montage of Ananya Panday, Siddhant Chaturdevi and Adarsh Gourav hanging out together – sometimes on their phones, sometimes watching cartoon on the projector and just chilling by themselves, all within the space of one room. The film will also touch upon reconnecting with the forgotten bits of life. “When you have to disconnect to connect,” said the teaser.

In an Instagram post, director Arjun Varain Singh wrote: “Feels incredibly surreal to announce my first film as a director! I cannot be more excited to take on the roller coaster that lies ahead. Blessed to have producers that care and support me like only they can! Cannot wait to get the party started. Filming starts Feb 2022!”

Kho Gaye Hum Kahan is expected to release in 2023, revealed the teaser.