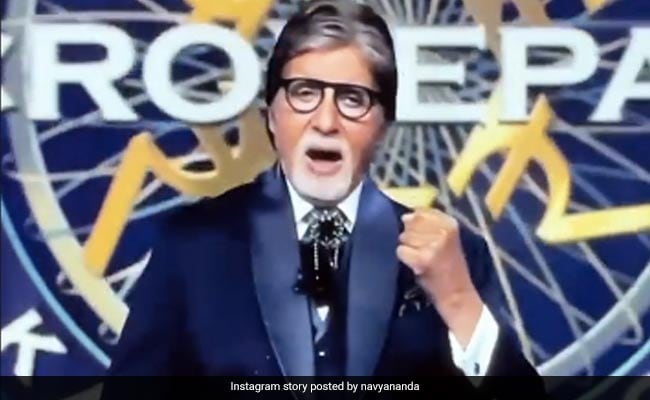 Big B in a still from KBC 13. (courtesy navyananda)

Navya Naveli Nanda was super excited to see her grandfather Amitabh Bachchan on the popular quiz show Kaun Banega Crorepati 13‘s premiere, which began airing on Monday. An excited Navya shared a clipping of Big B greeting the audience on the show on her Instagram story on Monday night and she wrote in her caption: “And he’s back.” Except the third season of the quiz show Kaun Banega Crorepati ( which was hosted by Shah Rukh Khan), all the other seasons were hosted by Amitabh Bachchan. The actor welcomed science teacher Gyan Raj on the hotseat as this season’s first contestant. This season, the fastest finger first round has three questions, after which the contestants will make it to the hotseat.

During the episode, Amitabh Bachchan added that it is the love of the audience that works as an “energy tonic” for him. He said, “Dekhiye, yahaan ki jo janta aur contestants hain, yehi hain mere energy ka tonic. Jis tarah hamari studio audience jo hai, mera swagat karti hain, unke utsah se mera jo pet ka dard hai, badan ka dard hai, wo sab kuchh gayab ho jata hai (The people at large and the contestants are my energy tonic. The way the studio audience welcomes me, it relieves me of all the aches and pains I have).” 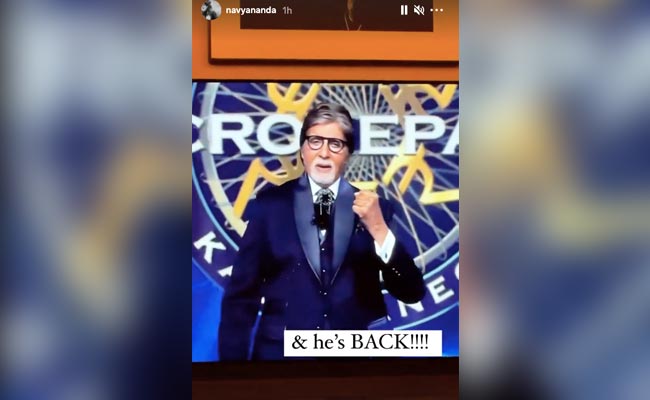 Navya Navelii Nanda, a graduate from New York’s Fordham University, is the co-owner of the Aara Health, an online platform which discusses health issues and more. She is the daughter of author Shweta Bachchan Nanda and entrepreneur Nikhil Nanda. She is the granddaughter of Bollywood stars Amitabh Bachchan and Jaya Bachchan. Her uncle Abhishek Bachchan and aunt Aishwarya Rai Bachchan are also celebrated actors.