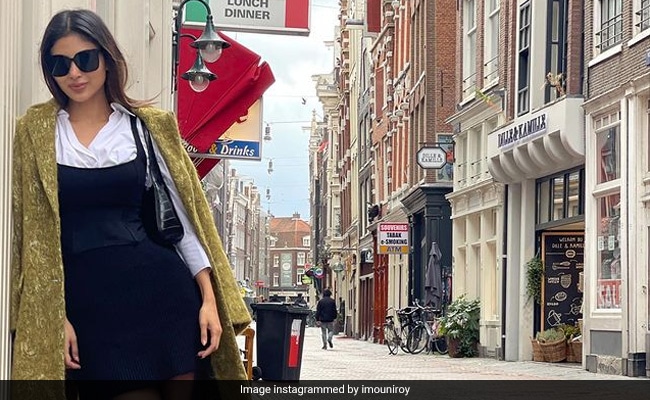 Mouni Roy loves to travel. There is ample proof of this on her Instagram timeline and for this we are glad. From pictures of her exploring new cities to videos of her trying out new food, Mouni Roy often gives us a peek into her travel diaries. Now, the actress has shared a video of herself from the scenic lanes of Amsterdam and it is evident that she is having a great time. In the clip, she is seen frolicking on the streets, looking her fashionable best. For her caption, she chose to quote the lyrics of the song Touch It by KiDi. She wrote, “High on life, wanna meditate.  Good vibes only.”

Fans and followers of the actress dropped heart and fire emoticons in the comment section. Take a look at the clip here:

Mouni Roy loves to travel. Previously, she shared a set of pictures from her day out in the Netherlands and wrote, “Black and white and err’ything in between.” We bet the caption is an ode to the stunning black and white outfit she is wearing in the images. Reacting to the post, actress Adaa Khan left heart-eye emojis in the comment section, while Arjun Bijlani left a heart emoji.

In another video, she is seen strutting on the streets of the European city like a true diva. As a fitting caption, Mouni Roy wrote, “She is a lil’ runaway movie!”

She also announced her arrival in Amsterdam with a picture that sent fans into a tizzy. Dressed in an all-black look, Mouni Roy wrote, “Transponded to the Dam.” Director Siddharth Malhotra echoed our thoughts and said, “I love your life. This jet-setter that you are.” Actor Karan Tacker wrote, “You are again travelling. I am very jealous.”

Mouni Roy began her career with television shows. She is known for her work in shows such as Kyunki Saas Bhi Kabhi Bahu Thi, Devon Ke Dev…Mahadev and Junoon – Aisi Nafrat Toh Kaisa Ishq, among others. With regard to films, she has played prominent roles in Made in China, Romeo Akbar Walter and Gold. Her next film is Brahmastra with Ranbir Kapoor and Alia Bhatt.