Mouni Roy Is A “Water Nymph” In Those Shocking Pics 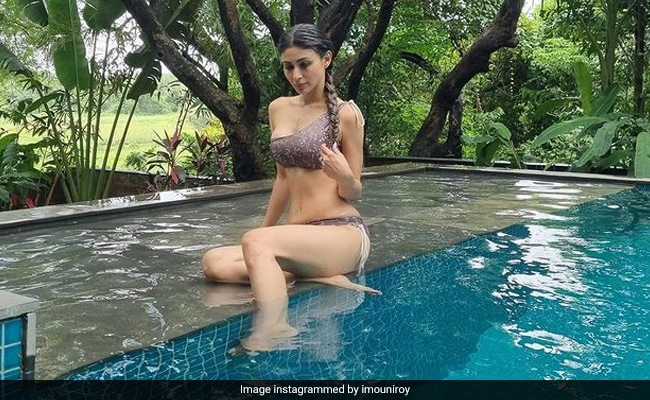 Wow, Mouni Roy. The actress updated her Instagram profile with stunning pictures of herself on Monday and left her fans in awe. Mouni, who often shares photos of herself having fun on the beach or in a pool, posted a set of pictures of herself chilling in a pool. The actress looks stunning in a grey bikini in the photo. She styled her hair in a braid. Sharing the photos, Mouni Roy wrote: “Rainwashed” and added a flower, a house and a tree emoji. Reacting to her post, actress Vidya M Malavade commented: “Water nymph” while actress Adaa Khan wrote: “Wooohooooo” with a fire icon. A fan commented: “OMG! Stunning.”

Mouni Roy, who made her debut in Bollywood with Akshay Kumar’s Gold, made us go wow earlier this year with these stunning pictures of herself from a beach in Dubai.

The actress, who has also featured in John Abraham’s Romeo Akbar Walter, proved that she is a pool baby with these photos of herself:

In terms of work, Mouni Roy was last seen in a music video titled Baithe Baithe, in which she co-starred with Angad Bedi. Her spy thriller London Confidential premiered on ZEE5 on September 18 last year. Before that, the actress starred in Made In China, in which she shared screen space with Rajkummar Rao, Paresh Rawal, Boman Irani, Gajraj Rao and Sumeet Vyas. She will next be seen in Ayan Mukerji’s Brahmastra, in which she will co-star Amitabh Bachchan, Ranbir Kapoor and Alia Bhatt.