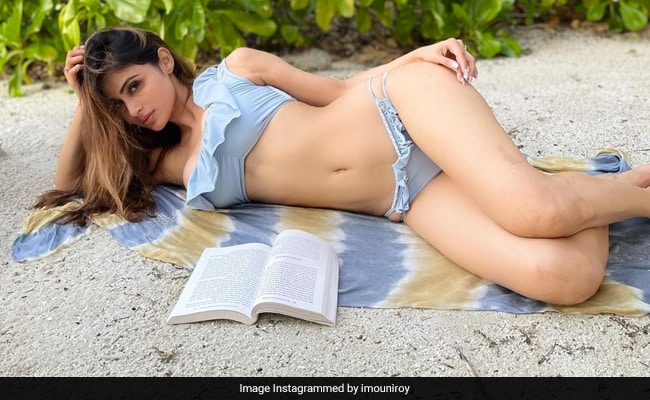 Mouni Roy is missing vacationing in the Maldives. The actress, who frequently visits the beach destination, posted two stunning throwback photos of herself from the island and made us go wow. Mouni Roy, who was last seen in a music video titled Baithe Baithe (co-starring Angad Bedi), looks resplendent in a grey bikini while as she poses with a book on a sheet on the beach. “It was hot outside and I was listening to some song indoors or was it a poem, ummm I forget!” Mouni wrote in the caption and added: “Dizzy, dizzy! #throwback #heaven #blessed.” Take a look:

Mouni Roy was in the Maldives earlier this month. She filled her Instagram feed with these stunning photos of herself:

To all Mouni Roy fans, have you ever wondered what the actress does when she is “waiting for the shot”? If yes, then you will find the answer in this video of Mouni.

Mouni Roy made her movie debut as a lead actress with the 2011 Punjabi film Hero Hitler In Love. The actress has also starred in Made In China, in which she shared screen space with Rajkummar Rao, Paresh Rawal, Boman Irani, Gajraj Rao and Sumeet Vyas, in Akshay Kumar’s Gold and in spy thriller London Confidential.

She will next be seen in Ayan Mukerji’s Brahmastra, in which she will co-star with Amitabh Bachchan, Ranbir Kapoor and Alia Bhatt.