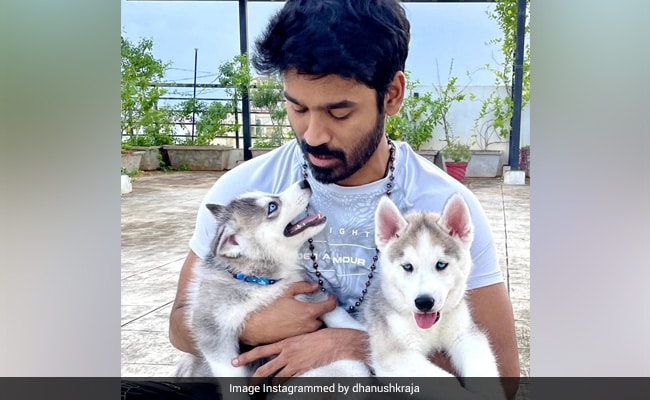 We know one more thing about south superstar Dhanush today – he’s a King Kong fan. On Tuesday, the 38-year-old actor revealed that his family has swelled by two and introduced the youngest members of his clan – two absolutely adorable fur balls. Well, we are talking about two husky puppies here, who stole Dhanush’s heart. Dhanush introduced the newest members of his family with an adorable post, in which he can be seen playing with the two puppies. Dhanush has named them King and Kong: “Welcome to the family King and Kong. Looking forward to all the new adventures together,” wrote Dhanush and hashtagged his post with these words: “Unconditional love.”

Dhanush’s photo with King and Kong will indeed make you go aww:

Dhanush is married to megastar Rajinikanth’s elder daughter Aishwarya, who is a filmmaker and singer. Looks like the husband and wife duo are animal lovers because on Janmashtami, Aishwarya spent the day like this: “Unconditional giver by nature. The very epitome of motherhood. Strongest form of the goddess herself. True meaning of purity …Most of all. The almighty Krishna’s best bud.”

In terms of work, Dhanush was last seen in Netflix release Jagame Thandhiram, in which he played the role of a rowdy gangster from Madurai. Dhanush’s upcoming movies also include Russo Brothers’ The Gray Man, a trilingual movie with Sekhar Kammula and Maaran, in which he plays the role of an investigative journalist. In Atrangi Re, Dhanush will co-star with Sara Ali Khan and Akshay Kumar.