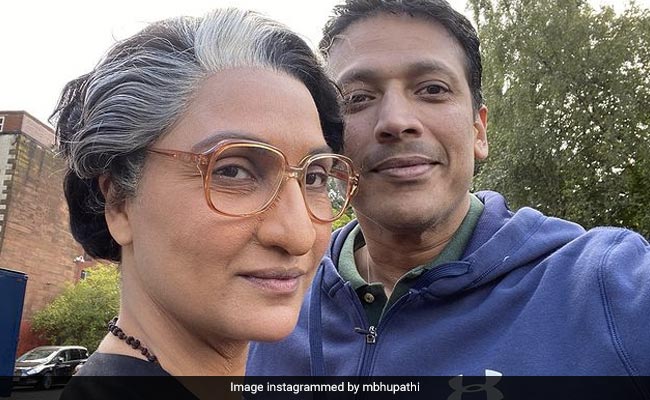 As Bell Bottom hits the screens, Mahesh Bhupathi cheered for wife Lara Dutta, who stars as former Prime Minister Indira Gandhi in the film. The tennis star shared a couple of pictures of himself with Lara Dutta, who can be seen sporting her look from the film. The photographs happen to be from Glasgow, United Kingdom, where parts of the espionage thriller have been shot. “Go Bell Bottom… Good luck,” he captioned the post. The film’s lead actor Akshay Kumar’s wife Twinkle Khanna too shared a picture from the film’s screening. Other than Lara Dutta and Akshay Kumar, Bell Bottom features Vaani Kapoor and Huma Qureshi, Adil Hussain, Thalaivasal Vijay and Abhijit Lahiri. It was the first film to be shot during the pandemic, last year.

Twinkle Khanna too gave her stamp of approval to the film and posting a picture with husband Akshay Kumar, she wrote: “Looks like a walk in the park but we are actually heading to something even better, the screening of Mr K’s fabulous movie-Bellbottom! #mustwatch.”

Lara Dutta has been trending big time for her look in the film. In an interview with news agency PTI earlier, the actress said that the most “challenging” aspect about playing Indira Gandhi on screen was to “get the body language of the character right.” Sharing her experience and the preparation that she did for her character, Lara Dutta said, “As you all know that the film deals with a hijack situation that happened during her tenure. Given the dramatic events that were unfolding, she was somebody who was very centered and not prone to any dramatics. So it was important to portray her in that form. “I had a great time. There was a lot of homework and research that went behind it. But it was an opportunity of a lifetime that I’m thankful for.”

Lara Dutta and former tennis player Mahesh Bhupathi got married in 2011 and are parents to a daughter named Saira. She was seen in the web-series Hundred that released last year.

(With inputs from PTI)

“The place’s My Child?:” Kareena Kapoor Writes In Her Maldives Postcard

“The place’s My Child?:” Kareena Kapoor Writes In Her Maldives Postcard