Maheep Kapoor Is All Hearts For This Pic Of Daughter Shanaya 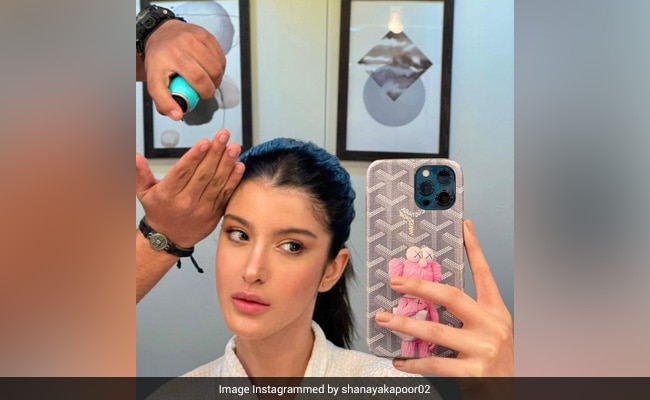 Shanaya Kapoor just made our day even better as she treated us to a brand new picture of herself. The stunning mirror selfie that Shanaya dropped on Instagram captures her getting ready. The picture features Shanaya Kapoor sitting in front of a mirror as her hairstylist works on her hair. She looks all decked up with flawless make-up and her hair tied in a neat ponytail. Sharing the picture on Instagram, Shanaya Kapoor wrote: “Get ready with us.” Shanaya’s post received scores of comments from her Instafam. Among others, Shanaya’s mother Maheep Kapoor commented on her post. “My love,” Maheep Kapoor wrote in her comment and added a heart and a heart-eyed emoji to the comment.

Last week, Shanaya had dropped a time-lapse video on Instagram. The video was quite similar to the recent picture as it featured Shanaya sitting in front of a mirror while a team of make-up artists worked on her. The video also features Shanaya enjoying some light-hearted moments with her make-up team. “If only we could get ready this fast,” she wrote in the caption of the post.

Shanaya Kapoor is the daughter of actor Sanjay Kapoor and his wife Maheep Kapoor. She enjoys a huge fan following. On Instagram alone, she has around 800,000 followers. Shanaya Kapoor keeps sharing pictures from her every day life on Instagram.

Here are some of them:

Shanaya Kapoor is all set to step into Bollywood. She will soon be launched in Bollywood by Karan Johar’s Dharma Productions. More details about Shanaya’s debut are awaited.