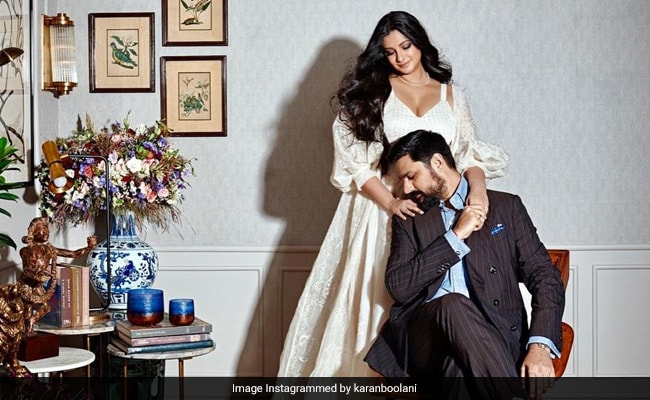 Filmmaker Karan Boolani summed up his love story with Rhea Kapoor in a single fabulous sentence on Instagram: “True story: we met on a movie set, she was new, I tried to bully her, ended up falling madly in love.” That has to be the best tiny tale we’ve read. Rhea and Karan, who dated for 12 years, got married last weekend surrounded by family and friends like family. The bride’s father Anil Kapoor left a fire emoji in the comments thread of Karan’s post; Rhea’s cousin Anshula posted a string of hearts. Karan Boolani didn’t disclose which movie set they met on – he worked on 2010 film Aisha which Rhea produced (she was no longer ‘new’) and which starred her sister Sonam Kapoor.

Rhea Kapoor shared several posts after the wedding last Saturday, writing in one: “12 years later, I shouldn’t have been nervous or overwhelmed because you’re my best friend and the best guy ever. But I cried and shook and had stomach flips all the way through because I didn’t know how humbling the experience would be. I’ll always be that girl who had to come home to juhu at 11 pm before my parents fell asleep. Only until now I didn’t know how lucky I was to feel torn. I hope we make a family so close that we have many, many loves of our life.”

The weekend wedding, which took place in the living room of the Kapoor home in Mumbai, was attended by mostly family – Rhea’s cousins Janhvi, Arjun, Khushi, Shanaya and Anshula have featured in a photo blitz on Instagram, not to mention her siblings Sonam and Harsh Varrdhan and Sonam’s husband Anand Ahuja. Anand shared a set of pictures from the wedding today, writing, “If you don’t believe in magic, you’ll never find it.” Karan and Rhea certainly found their magic.

Anshula Kapoor also shared this picture of the cousins today – Rhea and Karan are pictured with Sonam, Arjun, Mohit Marwah (whose mother Reena is the sister of Anil, Boney and Sanjay Kapoor) and Anshula.

Karan Boolani’s sister Cookie shared a picture of the newlyweds with the baraatis. “The most important thing in the world is family and love,” she wrote.

The wedding festivities ended with a reception party to which friends like filmmaker Farah Khan were invited.