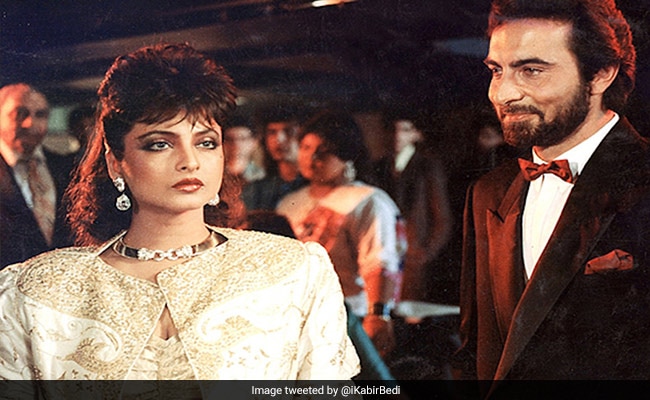 Filmmaker Rakesh Roshan’s hit classic Khoon Bhari Maang clocked 33 years today. Actor Kabir Bedi, who played a pivotal role in the film went down memory lane and recalled some “incredible memories” from the film’s shoot. Khoon Bhari Maang starred Rekha in the lead role. It also starred Shatrughan Sinha, Rakesh Roshan and Sonu Walia. Recalling the “great memories,” Kabir Bedi dropped a still from the film featuring himself and Rekha. He also shared a poster of the film. Kabir Bedi complemented the pictures with a note. In the note, the 75-year-old actor recalled how Rakesh Roshan had called him “back from Honolulu” for the shoot of Khoon Bhari Maang. Kabir Bedi was shooting for the 1980s TV series Magnum P.I. with Tom Selleck back then.

“Incredible memories of Khoon Bhari Maang come back on its 33rd anniversary. Rakesh Roshan called me back from Honolulu, where I was shooting Magnum P.I. with Tom Selleck,” he wrote. “It became a blockbuster hit. Great memories of Rakesh, Rekha, Shatrughan Sinha and Sonu Walia,” he added.

Many fans of Kabir Bedi commented on his post. “I was fascinated by the wildlife in the movie as a kid,” a Twitter user commented on Kabir Bedi’s tweet.

Incredible memories of Khoon Bhari Maang come back on its 33rd anniversary. Rakesh Roshan called me back from Honolulu, where I was shooting Magnum P.I. with Tom Selleck. It became a blockbuster hit
Great memories of Rakesh, Rekha, Shatrughan Sinha & Sonu Walia#KhoonBhariMaangpic.twitter.com/A9PUxjBGrD

Directed and produced by Rakesh Roshan, Khoon Bhari Maang was released in 1988. The film revolved around the story of Rekha (Arti Verma), who after being deceived by Kabir Bedi (Sanjay) sets out for revenge. Rekha plays the role of a wealthy widow and Kabir Bedi plays the role of her second husband. The film emerged as a blockbuster hit in 1988. Rekha also won a Filmfare Award for her work in the film.

Coming back to Kabir Bedi, the actor has starred in several international projects in addition to the Bollywood films that he has done. He rose to fame with the Italian mini-series Sandokan and James Bond movie Octpussy. As mentioned above, he later starred in the TV series Magnum P.I.. Khoon Bhari Maang was Kabir Bedi’s first Bollywood film after Aakhri Kasam. He appeared in other international projects like The Lost Empire, Roundtrip, Dynasty and The Thief Of Baghdad.

Some of his Bollywood projects include films Main Hoon Na, Yalgaar and The Hero: Love Story Of A Spy.