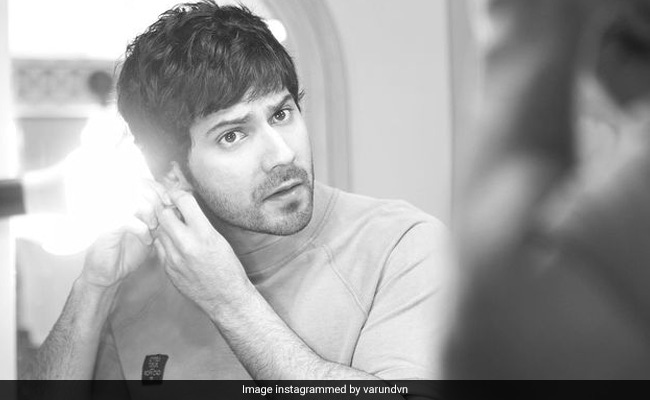 Varun Dhawan is a darling of the masses and it helps that he always appears to be supremely confident and charming in front of the camera. But the actor made a rather candid confession as he returned to shoot for his upcoming film Jug Jugg Jeeyo. Sharing a series of black-and-white images from the vanity van, Varun told his Instagram followers that he was nervous to step into the world of the film. While we are sure that the actor is going to hit it out of the park with his performance, the vulnerability that Varun refused to hide was refreshing.

And if the photos are anything to go by, Varun Dhawan has nothing to worry about, when it comes to looking good in front of the camera. The candid clicks range from the actor wearing an earring to presumably practising his lines. We also see him having an animated discussion with the director of the film, Raj Mehta.

In the caption, Varun Dhawan wrote, “Just some nervous moments before I step into the world of Jug Jugg Jeeyo again,” and tagged his co-stars including Anil Kapoor, Neetu Singh, Kiara Advani, Tisca Chopra among others.  Reacting to the image, the official page of Karan Johar’s Dharma Productions that is backing the film said, “This world is ready for you.” Several fans of Varun also conveyed their best wishes to the Dilwale star.

It looks like Varun Dhawan is happy to plunge back into work after wrapping up his other film, Bhediya, just a few weeks ago. The actor marked his last day on the sets of the movie with a heartfelt note about the project. Sharing a photo of his ripped physique that he is sporting in the movie, he wrote, “Last day. Filming our last key scenes on Bhediya in the next 24 hours. Since we are not allowed to put out any stills from the film, this was the last time I stared in the mirror and kinda had to say it’s time to say goodbye to my long hair, beard, and the changes my director Amar Kaushik has made me make for this character. Although something tells me this is not the end but a new beginning.”

Varun Dhawan was last seen in the film Coolie No 1 opposite Sara Ali Khan. The movie was directed by his father David Dhawan.