Ishaan Khatter’s Fanboy Degree Is 007 In This Throwback 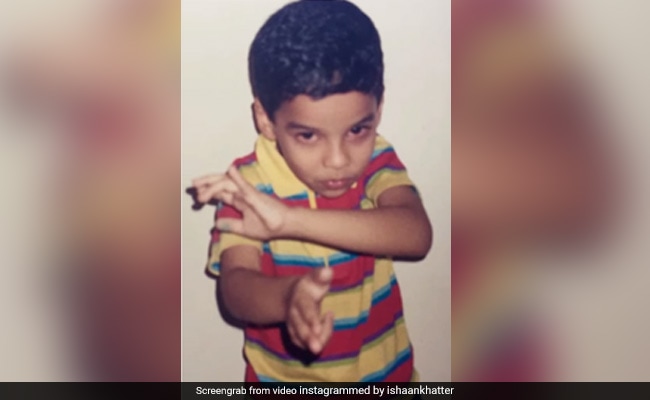 Ishaan Khatter in a still from the video. (courtesy ishaankhatter)

Ishaan Khatter is a bonafide star in the making. Born to actor parents, Rajesh Khattar and Neelima Azeem, it is no surprise that Ishaan Khatter loves the camera. Now, the actor has proved that he caught the acting bug as a child with a montage video that features some throwback photos. After viewing the video, we have only two words: absolute gold. In the clip, a young Ishaan Khatter is seen posing for the camera like a true action hero, using his tiny hands as a pretend gun. That’s not all, there is also an image of him lurking behind what appears to be a desk, true assassin style.

Just when we thought we had seen everything, we also caught a glimpse of baby Ishaan Khatter with a bow tie and a teenage Shahid Kapoor. The brothers looked adorable as ever. The last of the pictures in the montage shows baby Ishaan Khatter turning to look back at the camera from a distance. Was he practising for paparazzi shots, we wonder.

In the caption, Ishaan Khatter wrote, “Action ready lil nugget,” and added the legendary James Bond background score to the clip. Reacting to the post, mom Neelima Azeem said, “Born to move sweetheart.”  And we have to admit that she has got it right as both her sons have inherited her prolific dancing abilities.

Dad Rajesh Khattar dropped heart emojis in the comments as did director Zoya Akhtar. Fans of Ishaan Khatter responded with heart emojis to the fun clip.

We urge you to watch the video and make your day better.

Ishaan Khatter fans are no strangers to his throwback images. The actor often posts them on Instagram with witty captions. Take, for instance, this heartwarming image of Ishan with his mother. In the image, baby Ishaan seems happy to be sitting safely in Neelima Azeem’s arms as he smiles out of joy. “Ma one and only,” read the caption.

We also love this set of vintage pictures of baby Ishaan Khatter with his mother, again. Sharing his love for his mother with the world, he wrote, “Mom for president.”

Ishaan Khatter made his debut with Beyond the Clouds, directed by Majid Majidi. He followed this up with Dhadak and Khaali Peeli. He also played a pivotal role in A Suitable Boy, a British miniseries by Mira Nair based on Vikram Seth’s novel of the same name. His upcoming films include Phone Bhoot and Pippa.