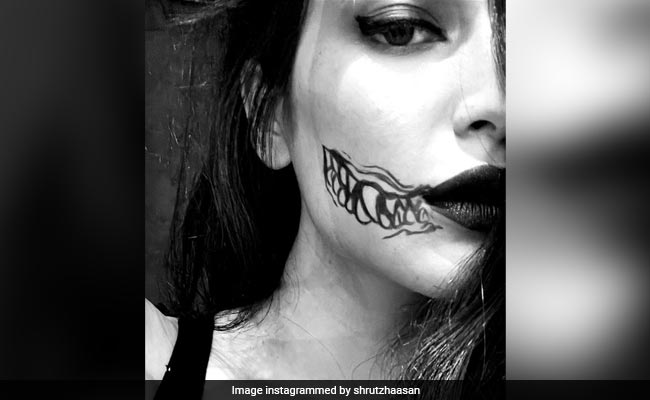 It’s Halloween month and seems like some celebrities are already preparing for it. Are you wondering who has flared up such thoughts in us? Well, it’s none other than Shruti Haasan. The actress has shared mind-boggling face-painting photos on Instagram and we are definitely reminded of Halloween makeup. In Shruti Haasan’s black and white Instagram photos, we see gothic patterns painted under her nose, on her cheeks and beside her mouth. At first, she claimed that it was a Halloween prep. But then the actress said that she was only kidding. But, Shruti Haasan didn’t forget to thank her boyfriend Santanu Hazarika for the face doodle. It read, “Prepping early for Halloween… just kidding every day is Halloween in this house. Face doodle by Santanu Hazarika.”

Shruti Haasan has been dipping into quite an artistic mood these days. One of the coolest actresses on social media recently got herself tattooed on the shoulder. It had a unique charm because it was a tattoo written in the Tamil script. It spelt out Shruti Haasan’s name in Tamil. “Say my name – say it out loud,” she wrote in the caption.

Shruti Haasan’s antics make her all the more relatable to her fans who call themselves Shrutians. She often engages in “Ask me anything” sessions on different social media platforms. While she answers most of the questions in her typical candid way, there are times when the actress uses her wit to bypass a query that she doesn’t encourage. Once, when a fan asked for her number on Twitter, Shruti gave the police helpline number. One can’t get wittier than this, can they?

Shruti Haasan often shares rare snippets from her life. The actress opens up before her fans and does not mind sharing photos from her early days in the industry. Shruti started off modelling at the age of 17 and she fetched a photo from her first modelling gig for her Instafam. Shruti’s caption read, “Mind blown when I found these – my first ever modelling gig at 17. I look a bit s***** and a bit star but that’s like life isn’t it. I’ve always loved working and growing, even sideways.”