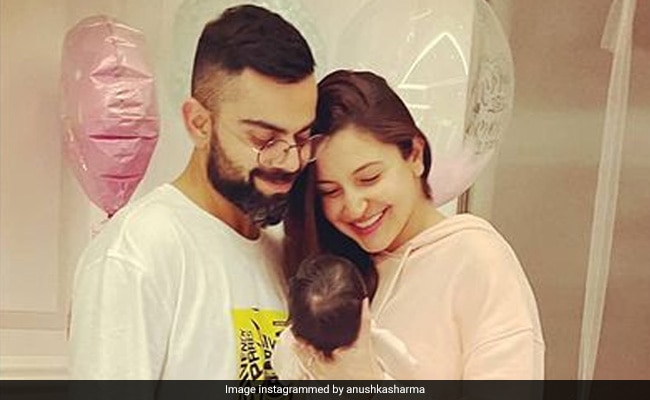 Anushka Sharma and Virat Kohli are currently in England with their baby daughter Vamika and the couple make sure to scoop out some time from their busy schedule to hang out together on the streets of London. Virat is in London for Team India’s five-match Test Series with England at the Trent Bridge in Nottingham. In a recent interview with fellow cricketer Dinesh Karthik, Virat Kohli spoke about how he and Anushka Sharma are “staying up to speed” with baby daughter’s schedule in London. Anushka Sharma and Virat Kohli welcomed Vamika on January 11 this year. In the interview, Virat also opened up about their morning routine – putting Vamika to sleep, heading out for breakfast, “grabbing a quick coffee” and coming back to their hotel room to spend time with their daughter.

Virat Kohli told Dinesh Karthik: “Firstly now, with our daughter, it’s putting her to sleep, first thing. Then, stepping out for breakfast somewhere, grab a quick coffee in the time that we get. And then, come back to the room to be with our daughter again. Priority is obviously making sure that we stay up to speed with her schedule.”

Anushka Sharma and Virat Kohli, who requested media and paparazzi fraternity to not click and share pictures of their daughter back home, are enjoying every bit of their time in London. Just walking on the streets is “probably the most relaxing thing” for the couple right now – it is something that they wouldn’t even dream about in India.

“Just taking a stroll down the street is probably the most relaxing thing for both of us. Such is the reality of our lives back home. Can’t complain about anything in life, but we have to adjust,” said Virat in the interview and added: “Thinking of going down the street in India is not even a dream for us now, it doesn’t even arrive in our dreams anymore.”