“He Is Protecting, Has Older Brother Vibe” 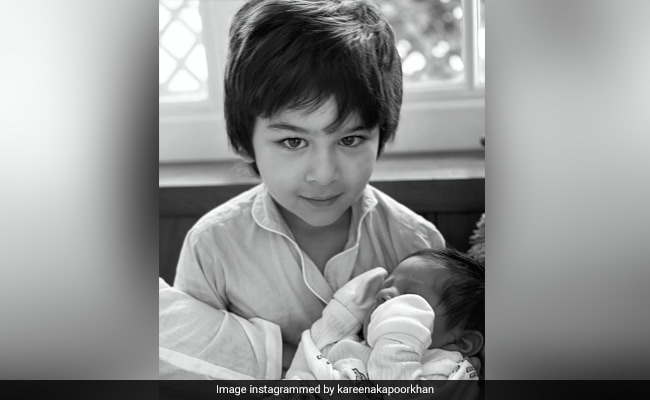 Kareena Kapoor, speaking to NDTV about her new book Kareena Kapoor Khan’s Pregnancy Bible: The Ultimate Manual For Moms-To-Be, talked about what was his elder son Taimur’s reaction after the birth of baby Jehangir. The actress and Saif Ali Khan became parents to Jeh, short for Jehangir, in February this year. Kareena Kapoor said that she and Saif were initially “worried” that Taimur would be “slightly jealous” of baby Jeh because he is the new addition to the family but Taimur, who is four-years-old, has been “wonderful” with Jeh and is “actually protective” about him. She added that he has got that “older brother vibe.” The actress also shared that when Taimur’s friends come over, he asks them if they’ve seen his little brother and “said hello to him.”

Speaking about how Taimur has been with his little brother, Kareena Kapoor told NDTV: “He is overwhelmed and thrilled. We were worried at first that if he would be slightly jealous or that slightly feeling of, like there is someone new in the house but you know, Taimur is so wonderful that he is actually protective about him now. When one or two of his friends come over now, he is like, ‘Have you seen my brother? Have you seen him, have you said hello to him?’ This is the way he asks his friends.”

Kareena added that whenever she and Saif Ali Khan tease Taimur about going on a holiday without his baby brother, he simply says: “No, not without Jeh.” She said: “We also tease him sometimes, we tell him like shall Saif, me and him go on a holiday, I will ask him and he will be like, ‘No, not without Jeh’. He is protective, he has got that older brother vibe. In that sense, it just worked out perfectly fine. There was never that insecurity and I think me and Saif also balanced it out a little bit.”

Kareena and Saif Ali Khan have taken a “conscious decision” of not sharing many pictures of baby Jeh on social media to protect him from the “constant pressure of being in the limelight.” The actress has not revealed the face of her little baby in any of her Instagram posts yet. However, her book contains adorable photos of baby Jeh. On Mother’s Day, the actress sent the Internet into a tizzy by posting a cute picture of Taimur holding his little brother in his arms. And captioning it: “And these two give me hope… for a better tomorrow.”

Talking about her decision of not sharing pictures of Jeh on social media, Kareena said that after seeing the “media frenzy” around Taimur on his name and pictures when he was born in 2016, she and Saif Ali Khan decided to give Jeh “time and space” to grow. She told NDTV: “(Not sharing pictures of Jeh) is a bit of conscious decision because I think the fact that there was so much media frenzy on Taimur and what’s his name and generally everything about him, so this time around, just need a little bit of breather. At the end of the day, they are kids, they need to have their space, they need to have their time. And I don’t want anybody to be so interested in them. They should be allowed their space to grow, not this constant pressure of being in the limelight. And that’s why we have taken this decision for Jeh.”

Kareena Kapoor also talked about shooting for Laal Singh Chaddha with Aamir Khan when she was pregnant and how she dealt with lockdown and coronavirus pandemic during her pregnancy in a conversation with NDTV.