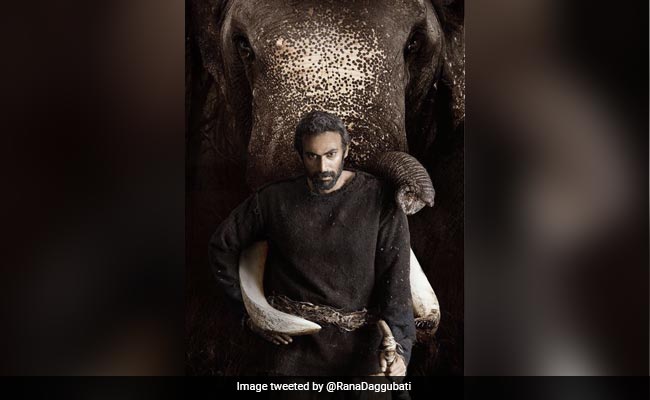 There is no denying that the point that Haathi Mere Saathi makes is absolutely valid. Its essential plea has great relevance and urgency because we live in times of increasing deforestation hastened by myopic government policies and runaway commercial greed. It is another matter that the method that writer-director Prabhu Solomon employs to deliver the message is gratuitously high-pitched and completely devoid of nuance.

Filmed primarily in Kerala and supposedly set in Chhattisgarh, Haathi Mere Saathi, is streaming on Eros Now. This is the Hindi version that was shot simultaneously with the Tamil and Telugu ones – Kaadan and Spider respectively – but six months longer than the other two to land in our midst.

The film is headlined by Rana Daggubati as a jungle man who single-handedly takes on a battery of people who invade the habitat of his animal friends, a reserve forest in a no-development zone. It trumpets and bellows its way to a predictable climax.

What the outcome of the confrontation will be is signalled pretty early. How the preachy, inordinately long Haathi Mere Saathi gets there is the only point of interest that remains. Along the way, expect some thrills, many spills and an all-out clash of wills over a forest that is in danger of being wiped out.

No matter how messy everything else in Haathi Mere Saathi might seem, the lead actor’s fans will find no reason in its dense narrative thickets to feel shortchanged. The script puts all its eggs in one basket and that basket rides entirely on Rana Daggubati.

The character he plays is inspired in part by the real-life Jadav Payeng, known as the forest man of India because he took upon himself the mission to plant thousands of trees in Majuli and create an entire reserve forest. Haathi Mere Saathi has something similar. Our hero Sumitranandan – the name is mentioned only is passing – has earned the sobriquet Bandev (Lord of the Jungle) because his personal tree count is as high as 100,000.

That is where a sharp fork in the forest takes the story in a totally different direction to a place where the conventions of a good-versus-evil story take over and hurl us into a corridor of twists and turns that rely on unbridled melodrama for impact.

The film opens with an idyllic scene that has the protagonist sitting by a gurgling stream as a colourful CGI bird flies around with abandon. The man, having been nurtured by nature, treats the trees, the creepers and the animals with the utmost respect and care. When the earth-movers and mechanized saws arrive to make a clearing in the heart of the jungle for the construction of luxury condominiums, he is beside himself with rage. And so are the elephants.

The ‘invaders’ are led by a smarmy politician (Anant Mahadevan) who also happens to be the environment minister. He sells his urban clients the carrot of a 50-hectare township, complete with residential towers, amphitheatres, gymnasiums, shopping malls and swimming pools. To fulfil his grand design, he sends in his men – a contractor, a lawyer and a battery of construction workers – and orders them to swing into action.

Bandev is as quick on the draw as anyone else out here. That is hardly surprising. He knows the forest inside out because not only was he born and raised here his family has been in charge of its resources for generations. His resistance is stout. It triggers a no-holds-barred battle between the forest dwellers – humans and animals alike – and the real estate developers.

When Rana Daggubati isn’t on the screen peddling a fearsomely feral version of an environmentalist and wildlife activist, sundry other characters peep out of half-baked subplots. Among them is a brother and sister duo who have taken up arms to fight for the rights of the inhabitants of the forest. The role of the Naxalite girl is played by Zoya Hussain.

Also here is a guy called Shankar (Pulkit Samrat), the mahout of a kumki (trained) elephant deployed to drive away the wild pachyderms that are on the rampage and in mood to let the construction work progress unhindered.

A half-hearted romantic track is sought to be developed. Shankar, who alternates between running with the hares and hunting with the hounds, falls head over heels for the rebel girl. But sure enough, the love story is abandoned midway because, as is obvious from the very beginning, it is extraneous to the larger scheme of things.

No different is the treatment that the screenplay metes out to journalist Arundhati (Shriya Pilgaonkar), a sensitive, upright pen-pusher firm on her commitment to the truth and the downtrodden. She, too, is unceremoniously jettisoned so that she does not take the spotlight away from the larger-than-life hero in any way.

In fact, the Haathi Mere Saathi screenplay appears to revel in introducing characters and then merrily forgetting them. Another such is a forest officer (Vishwajeet Pradhan) who helps the protagonist build a legal case against the proposed township. Once the man has served his purpose, he is swallowed by one of that many black holes that dot the script.

In the end, it boils down to Rana Daggubati holding the fort with all his might. Sadly, the walls of the fort are shaky and several of them crumble in a heap as the face-off between the one-man army and an entire platoon of undesirable elements reaches a crescendo. To the lead actor’s credit, he stands tall amid the ruins.

He plays the forest man with an eye on emphasizing his pure animal instincts. He has a bear-like gait. He sways his neck jerkily from side to side. His dialogue delivery approximates growls and roars. Bandev is a modern-day avatar of Rousseau’s Noble Savage, uncorrupted by personal ambition and material avarice. Yes, he is as unreal as that sounds.

It is a tall order for Rana Daggubati, but he gamely carries the burden of the film on his broad shoulders. As for the film itself, like the elephants that the hero fights for, it is in desperate need of a rescue act. Groaning and grunting under its own weight, Haathi Mere Saathi ends up crushing its bulky theme with shrill sermonizing.