From Sonam Kapoor’s Health Diaries. See What She Posted Sonam Kapoor, who returned to Mumbai last month, has actively been sharing posts from different facets of her life on social media. On Tuesday, she decided to share a glimpse of her workout session of sorts. The actress, on her Instagram story, posted a mirror selfie from what appears to be her gym. The actress can be seen dressed in grey athleisure as she poses in front of the mirror. No caption needed. Sonam Kapoor flew to Mumbai a few weeks ago, just in time for sister Rhea Kapoor’s wedding to her longtime boyfriend Karan Boolani. 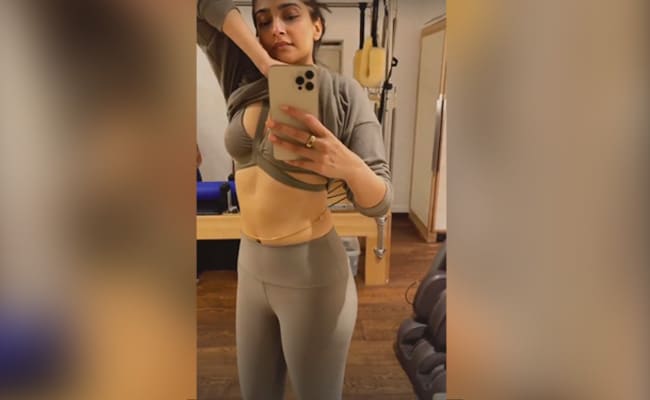 Earlier, she posted a loved up picture with her husband Anand Ahuja, who is in London these days and she wrote: “I miss you terribly… Can’t wait to see you. #everydayphenomenal.” He replied to her post with this comment: “Cute! You look so… And I look like I don’t know what I’m doing.”

Sonam Kapoor married her longtime boyfriend Anand Ahuja in a big, fat wedding in May 2018, which was a star-studded affair. Anand Ahuja runs the fashion label Bhane and the sneaker boutique VegNonVeg. The couple were staying in London for over a year.

The actress made her debut in Bollywood with the Sanjay Leela Bhansali’s film Saawariya (2007). Sonam Kapoor, star of films like Neerja, Aisha, Khoobsurat, Veere Di Wedding, The Zoya Factor, Ek Ladki Ko Dekha Toh Aisa Laga and Raanjhanaa, will next be seen in Shome Makhija’s film Blind. She also had a cameo in AK vs AK, starring her father Anil Kapoor and filmmaker Anurag Kashyap.