From Preity Zinta’s Kitchen Lawn. Her New Submit Is An “Apple Season” Particular 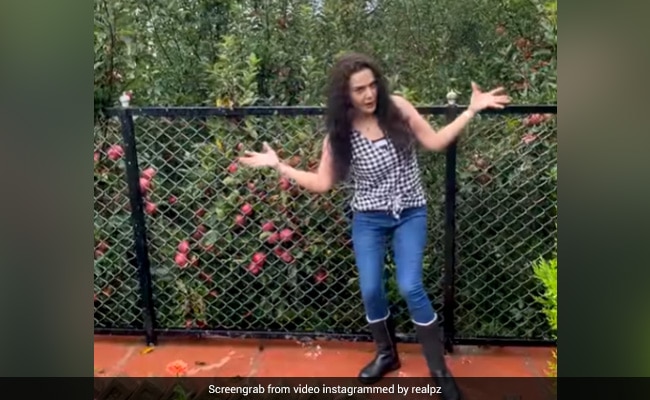 Preity Zinta in a still from the video. (courtesy realpz)

Preity Zinta’s love for food and gardening clearly reflects in her latest Instagram entry. On Tuesday, an excited Preity posted a video from her kitchen garden or “ghar ki kheti” as the actress likes to call it. Preity, who has been sharing posts about homegrown veggies, fruits and herbs in her backyard, this time, posted a video of her apple orchard in Himachal Pradesh. Preity recalled the memories associated with the farm and wrote in her caption: “I was so excited to see apple trees after so long that the minute it stopped raining I ran out and made this video. Glad I did so cuz minutes after it was pouring again. Going back home to our family farm during apple season after so many years was an emotional and exhilarating experience. Growing up, this place was dominated by the larger than life presence of my grandfather, grandmother and Rajinder Mamaji and Uma Mamiji. We spent the best days of my childhood here.”

The actress added that the “apple season was always special” and wrote: “So many rules. No eating in the grading halls, no disturbing or distracting the labour that diligently plucked apples in special baskets called Kiltas, no playing with apples or throwing them around etc.” The actress revealed that her favourite part was “apple plucking and collecting the largest and the smallest apples of the season and of course glasses of freshly squeezed apple juice.”

Preity Zinta, who often shares videos and pictures of her homegrown produce, wrote: “Two years ago, I officially became a farmer and am so proud to be part of the farming community of the apple belt of Himachal Pradesh. Here’s a shout out to Himachal Apples that are the best apples in the world. I’m super stoked and proud of how well everything is maintained in all the farms given the covid situation, shortage of labour etc… I’m also extremely proud of my brother for going completely organic and replanting our orchard with organic apple trees.”

The actress got married to Gene Goodenough in 2016 and she moved to Los Angeles. However, she keeps visiting India. Preity Zinta is best known for her performances in films such as Dil Se, Lakshya, Salaam Namaste, Kal Ho Na Ho, Veer-Zaara and Dil Chahta Hai among many others. Preity Zinta was last seen in Bhaiyaji Superhit, which released in 2018. She also featured in a small role in ABC series Fresh Off The Boat in one episode.