Divya Agarwal Breaks Down After Boyfriend Varun Sood Visits Her 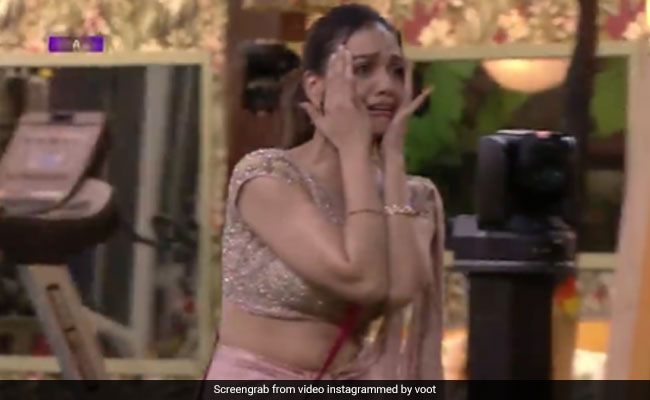 Divya Agarwal was in for a treat on the latest episode of Bigg Boss OTT when she had a special guest come on the show just to cheer her on. But who? It’s Divya’s boyfriend, Varun Sood. He is seen making an appearance after a segment hosted by actresses Devoleena Bhattacharjee and Rashami Desai. As soon as Divya catches a glimpse of Varun, she breaks down in tears. The video was shared on social media by Voot, the streaming platform. In the clip, Divya is seen running towards the makeshift glass cubicle that is used to separate the guests from the contestants. The couple, who became extremely emotional upon seeing each other, also share a kiss through the glass. A sobbing Divya says, “I miss you.” Cheering Divya on, Varun tells her that she does not need anybody to move ahead in the game. Varun also adds that when he saw her crying in the bathroom in one of the previous episodes, he was reduced to tears as well.

Varun Sood also interacts with the other contestants. Speaking to Shamita Shetty, he says, “Shamita, you had said we won’t get married or won’t end up together. I would just like to tell you: you don’t know me so please don’t make a judgement like that.”

Varun Sood also tells the housemates, “Aap logon ke liye ye sherni hai, par mere liye yeh bachi hai (She is a lioness for you, for me, she will always be a child).”

Varun Sood also shared images from the meeting and wrote on Instagram, “I was sitting in an alley, looking at her from a small window. The moment I had to go in. I went blank, I didn’t know what do to. My heart was beating so fast. She saw me and she knew I’m proud of her.”

Varun Sood is currently seen as a finalist on Khatron Ke Khiladi 11. Divya Agarwal and Varun Sood appeared on the show Ace Of Space.