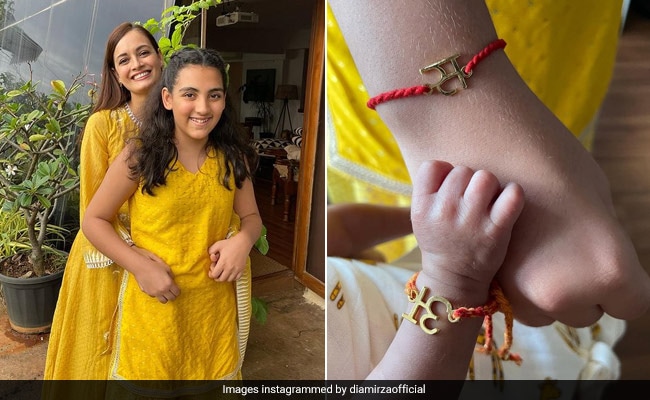 On son Avyaan Azaad’s first Rakhi with sister Samaira, Vaibhav Rekhi’s daughter with ex-wife Sunaina, actress Dia Mirza, who married Vaibhav earlier this year, shared adorable photos on social media and accompanied them with equally adorable captions. On Sunday, Dia Mirza posted a couple of pictures from her Raksha Bandhan celebrations. In one of the photos, Samaira can be seen tying a rakhi to little Avyaan’s hand while another picture features baby Avyaan’s hand on Samaira’s hand. We loved their respective customized rakhis, which had the initials of their names on them. Sharing photos of Samaira and Avyaan Azaad, Dia Mirza, who smashed the patriarchy in her own awesome way at her wedding this year, wrote: “Our first Raksha Bandhan. We will love and protect EACH OTHER. #SmashPatriarchy #BrothersAndSisters.”

Dia Mirza and Vaibhav Rekhi welcomed their son Avyaan Azaad in May. Announcing the news on social media last month, Dia Mirza, who married Vaibhav in February, wrote: “To paraphrase Elizabeth Stone, ‘To have a child is to decide forever to have your heart go walking around outside your body.’ These words perfectly exemplify Vaibhav and my feelings right now. Our heartbeat, our son Avyaan Azaad Rekhi was born on May 14th. Having arrived early, our little miracle has since then been cared for by tireless nurses and doctors in the Neonatal ICU. A sudden appendectomy during my pregnancy and a subsequent and very severe bacterial infection could have led to sepsis and proven to be life threatening. Thankfully, the timely care and intervention by our doctor ensured the safe birth of our baby via an emergency C-section.”

In terms of work, Dia Mirza is known for her performances in films like Rehnaa Hai Tere Dil Mein, Sanju, Dum and So.