“Child Me Used to be Adorable,” Writes Sonam Kapoor. Mother Sunita Has This To Say 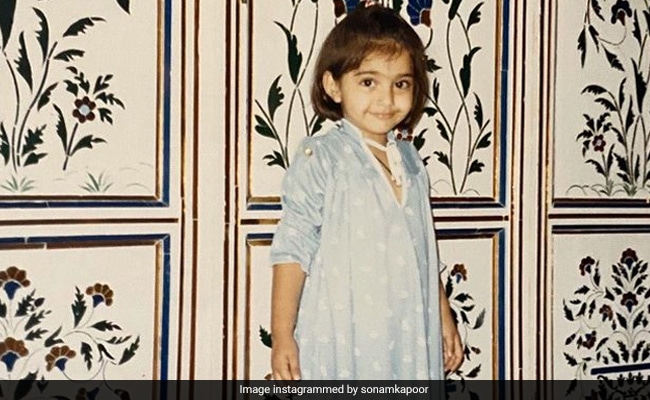 Sonam Kapoor’s latest Instagram entry is just too cute. The actress dug out a picture from her childhood days and shared it on her Instagram profile. The actress looks adorable in a powder blue outfit as she poses for the camera. She captioned the post: “Baby me was cute.” Reacting to Sonam’s post, her mom and jewelry designer Sunita Kapoor wrote: “Grown up Sonam is cute and beautiful.” The Neerja actress replied to her mother’s comment with heart and hug emojis and she wrote “Mama.” The actress’ Instafam dropped heart emojis in the comments section of her post.

This is what Sonam Kapoor posted:

Sonam Kapoor – Anil and Sunita Kapoor’s eldest child – is a renowned Bollywood actress, while her sister Rhea Kapoor is a filmmaker. Sonam and Rhea run an apparel brand together called Rheson. Anil and Sunita Kapoor’s youngest child Harshvardhan Kapoor is also an actor, who made his Bollywood debut in Mirzya. He also starred in Bhavesh Joshi Superhero.

Sonam Kapoor married her longtime boyfriend Anand Ahuja in a big, fat wedding in May 2018, which was a star-studded affair. Anand Ahuja runs the fashion label Bhane and the sneaker boutique VegNonVeg. The couple were staying in London for over a year.

The actress made her debut in Bollywood with the Sanjay Leela Bhansali’s film Saawariya (2007). Sonam Kapoor, star of films like Neerja, Aisha, Khoobsurat, Veere Di Wedding, The Zoya Factor, Ek Ladki Ko Dekha Toh Aisa Laga and Raanjhanaa, will next be seen in Shome Makhija’s film Blind. She also had a cameo in AK vs AK, starring her father Anil Kapoor and filmmaker Anurag Kashyap.