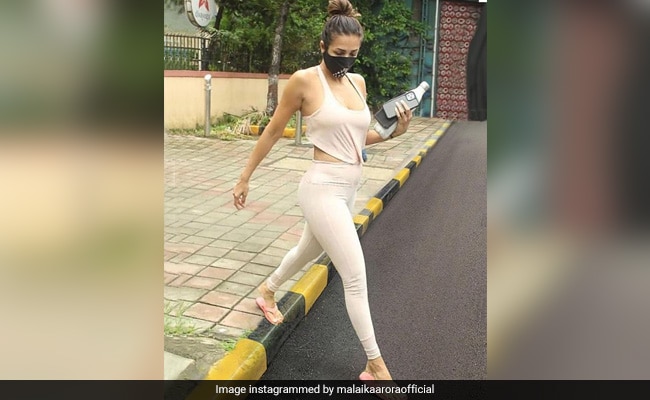 While most of us are still rueing the fact that the week has begun, actress Malaika Arora is raring to go. The model, actress and fitness enthusiast is looking forward to the week ahead and she revealed this with a candid picture of herself on Instagram. The fashion diva shared a photo of herself stepping out after finishing her workout routine with a water bottle and phone in hand. Dressed in beige activewear, Malaika looks lovely as ever. However, it was the caption that caught our attention. “Stepping into a new week with full josh…lots to be happy and grateful for,” it read. Reacting to the image and the thoughtful caption, fans of the star flooded the comment section with hearts and fire emoticons.

Previously, Malaika Arora had given us a glimpse of yet another Monday mood of hers. Dressed in jeans and a crop top, the model made heads turn as always. She wrote in the caption, “Mask up, ripped jeans, crop top…My kinda Monday mood.”

The actress’ Instagram timeline is a mix of all things glamorous and real. From family posts to fitness videos, Malaika Arora has something to offer to everyone. Recently, she shared an image of her son Arhaan Khan and their pet dog. In the caption, she said, “My loves, my life, my everything.” Reacting to the photo, actress Dia Mirza said, “Malla, is this the same little boy? How fast they grow up.” Meanwhile, Malaika’s sister, actress Amrita Arora and friends designer Seema Khan and Bhavana Pandey left heart emojis.

In another picture that revealed her fun side, Malaika Arora is seen twinning with her best friend, actress Kareena Kapoor Khan in Gucci T-shirts. The image was captured by Malaika’s sister Amrita. The caption read, “Gucci BFFs forever. Amrita Arora, you capture us good.”

Malaika Arora rose to fame with her work in music videos such as Gur Naalo Ishq Mitha, Chaiyya Chaiyya and Munni Badnaam Hui, among others. She has also appeared as a judge on dancing and modelling shows.