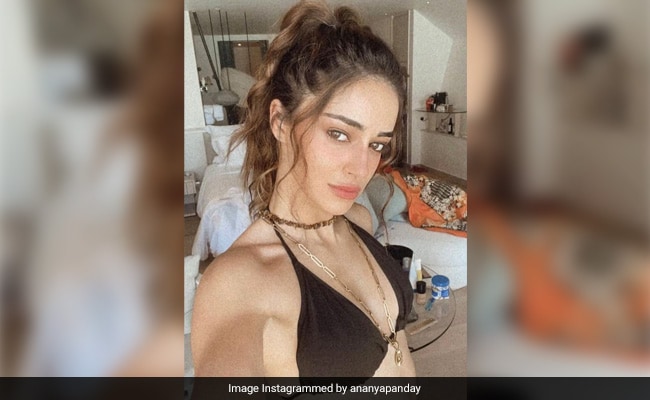 Ananya Panday, who is currently in the Maldives for work (as per her recent Instagram stories), set the Internet on fire on Friday by sharing a stunning picture of herself. “Hot mess,” she wrote in the post. Ananya can be seen sporting a black bikini in the picture. The actress completed her look with a gold chain and a choker. Her messy ponytail added more glamour to her picture. Reacting to Ananya’s post, singer Kanika Kapoor dropped a fire icon in the comments section. Fans of the actress also flooded her post with red heart and fire icons. Take a look at Ananya Panday’s latest post here:

On Thursday, Ananya Panday announced her new film titled Kho Gaye Hum Kahan. She will be seen alongside Siddhant Chaturvedi and Adarsh Gourav in the Arjun Varain Singh-directed film. The movie will be backed by Tiger Baby Films and Excel Entertainment. Sharing the poster of the film, Ananya wrote: “Find your Friends and you won’t need followers” while captioned another clip from the film like this: “Kho Gaye Hum Kaha. When you have to disconnect to connect.”

Ananya Panday made her Bollywood debut with Student Of The Year 2, in which she shared screen space with Tiger Shroff and Tara Sutaria. The film was the sequel to 2012’s Student Of The Year. She was next seen in Pati Patni Aur Woh, co-starring Kartik Aaryan and Bhumi Pednekar. Ananya’s last film was Khaali Peeli. She has a couple of films lined-up now – she will next be seen in a film opposite Vijay Deverakonda (directed by Puri Jagannadh), as well as in Shakun Batra’s romantic drama alongside Deepika Padukone and Siddhant Chaturvedi.