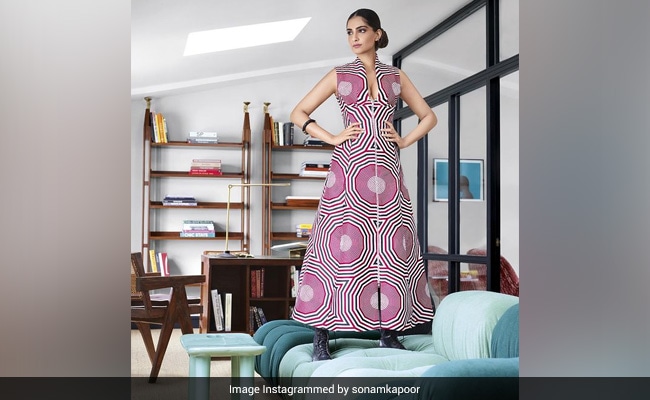 Sonam Kapoor offered a virtual tour of not only her London apartment but also husband Anand Ahuja’s office. On Instagram, Sonam shared photos of her stunningly decorated spaces clicked for Architecture Digest magazine’s latest issue – one of the photos shows Sonam standing on a couch at Anand Ahuja’s workspace. Reacting to Sonam’s pose, Anand Ahuja left this ROFL comment on her post: “This picture will always come to my mind whenever I sit on that couch now.” Replying to Anand, Sonam laughed out loud and offered an apology of sorts, all in good humour, of course: “…sorry I stood on the new couch.” Take a look at their comment exchange here: 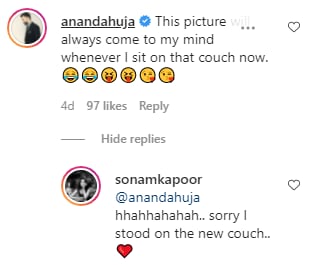 Meanwhile, Sonam Kapoor described Anand Ahuja’s London office in these words: “We spent the last year converting the mews into a peaceful yet inspiring sanctuary that reflects our love for South Asian heritage, craftsmanship and art.”

Sharing glimpses of her London home, Sonam Kapoor wrote: “The first time Anand Ahuja and I stepped foot into our flat it instantly felt like home! It’s a two and a half bedroom space nestled in Notting Hill, and perfect for where we are in our lives at present.”

Sonam Kapoor and Anand Ahuja got married in May 2018 and have been shuttling between India and London ever since. Back home in India, while Sonam lives in Mumbai’s Juhu, Anand Ahuja’s family home is in Delhi. Anand Ahuja owns the sneaker store VegNonVeg, which has outlets in both Mumbai and Delhi. He is also the founder of clothing bran Bhaane.