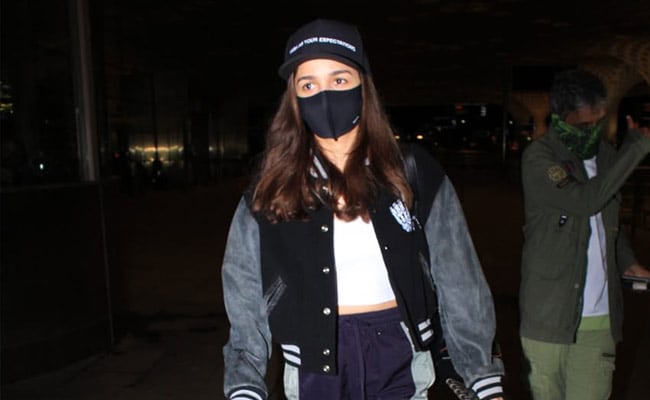 A quick look at Thursday’s Twitter trend list will show Alia Bhatt as a top trend? Why, you ask? Well, it’s for her airport look and not just any airport look. A look that according to a paparazzo is very similar to that of the actress’ boyfriend Ranbir Kapoor. Alia Bhatt, who was photographed at the Mumbai airport recently, was seen dressed in track pants, jacket and a cap that Alia self-admittedly stole from boyfriend Ranbir Kapoor’s closet (more on that later). “RK wala look lag raha hai,” the paparazzo told Alia, referring to her boyfriend Ranbir Kapoor, who is often seen wearing similar caps at the airport. The pap mistakenly addressed Ranbir as Ranveer Singh, responding to which Alia said, “Kya? Ranveer Singh?” The video is trending big time and has been shared by several fan clubs.

Earlier, Alia Bhatt posted a picture of herself wearing the same cap and she wrote: “When you miss him so you steal his belongings (and make sure you take many selfies).”

Ranbir Kapoor confirmed his relationship with Alia Bhatt in an interview last year, where he referred to her as his “girlfriend” and said that if it weren’t for the pandemic, they would have been married. Fans of Alia Bhatt and Ranbir Kapoor will get to see them share screen space in Ayan Mukerji’s Brahmastra.

Other than Brahmastra, Ranbir Kapoor has shamshera, co-starring Vaani Kapoor and Sanjay Dutt, lined-up. He will also be seen in an untitled film with Shraddha Kapoor. The actor will also star in Sandeep Reddy Vanga’s Animal, with Anil Kapoor and Parineeti Chopra.