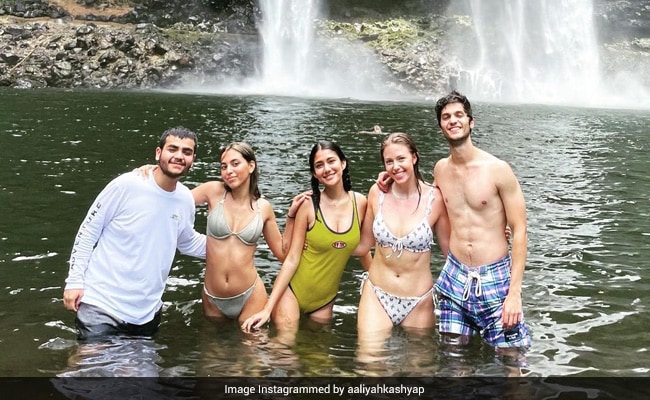 Filmmaker Anurag Kashyap’s daughter Aaliyah went on a hike with her friends in Hawaii and shared mesmerising pictures from her outing on her social media profile. In the pictures, Aaliyah and her friends can be seen enjoying the beauty of Wailua Falls that is situated on the island of Kauai in Hawaii. She looks fabulous in a white bikini. In one of the videos from Aaliyah Kashyap’s post, she can be seen swimming. “Definitely worth the hike,” she wrote in the caption of her post. Reacting to her post, her friend and actress Janhvi Kapoor’s sister Khushi Kapoor commented: “OMG.”

Aaliyah Kashyap often shares glimpses of her life with her friends, family and boyfriend Shane Gregoire. In one of recent Vlogs, she gave us a sneak peek into her outing with Shane Gregoire at the Laguna Beach in California. “Day at Laguna Beach. A small snippet from my latest vlog ,” she wrote in the caption. Check it out here:

Aaliyah trended big time on social media last month after she revealed that she received “full-on hate” from social media users for discussing sex and premarital pregnancy with her father in one of her YouTube videos.

Aaliyah, who has previously also called out online haters for sending her “disgusting” and disrespectful messages for posting pictures of herself in lingerie, told Zoom TV: “You should have seen the comments on the video I made with my dad. There’s like these… I don’t even know what people have come on my channel… Full-on hate. Because sex and pregnancy and drugs and blah blah blah. They were just like, ‘How can you talk to your parents about this? You should be ashamed of yourself’.”