Aahana Kumra, Quarantined In London, Is Sweating It Out And How. See Pics 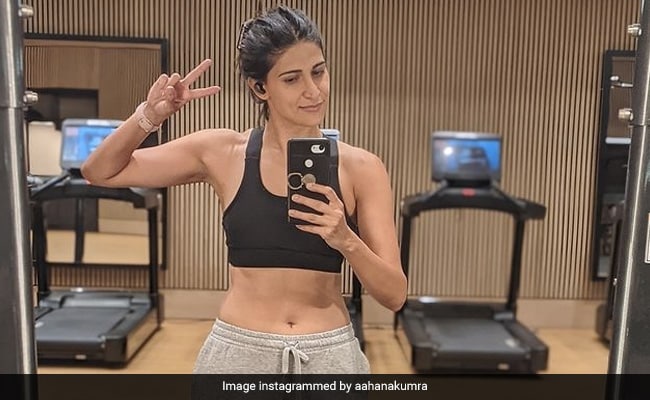 London or Mumbai, Aahana Kumra will not miss her work out sessions for the world. The Lipstick Under My Burkha actress checked into Instagram from London recently to reveal how she kick-started her trip in the English capital. Looks like she did it with an intense session at the gym. Aahana Kumra posted a pile of photos on Instagram which appear to be from after her work out session. Aahana Kumra can be seen flashing the victory sign in her photos, which show her toned mid-riff. Aahana Kumra’s bunch of hashtags reveal that having recently travelled to London, she’s currently in quarantine.

Earlier on Wednesday, Aahana Kumra shared glimpses of her travel diaries on Instagram. “London Calling!” she captioned her photos as she checked in from the Heathrow Airport. “Will miss mamma and Mushu,” wrote Aahana. Swipe left for an adorable glimpse of Aahana’s Mushu.

Meanwhile, when in Mumbai, Aahana Kumra loves to work out on the Juhu beach: “Best Sundays are those spent at the beach! Thank God for small mercies,” Aahana Kumra wrote in a post.

In terms of work, Aahana Kumra is best known for starring in films such as Lipstick Under My Burkha, The Accidental Prime Minister and The Blueberry Hunt. She has also featured in a bunch of short films such as Siberia, Dreaming Awake, Ek Tha Main and Queen Of Hearts. On television, she’s featured in shows such as Agent Radhav and Yudh. Aahana Kumra’s resume also includes web shows such as Rangbaaz, Bombers and Sandwiched Forever.