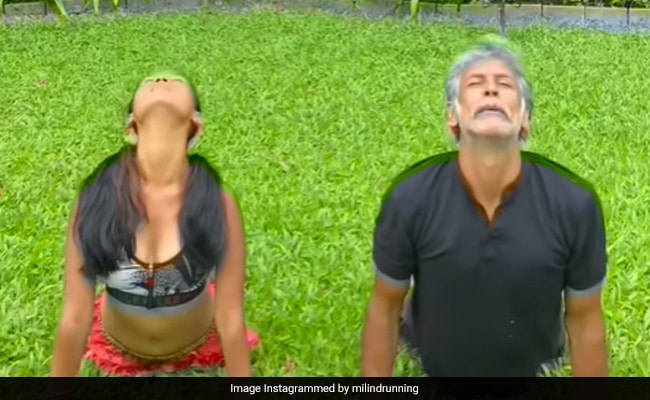 Milind and Ankita in a still from the clip. (Image courtesy: milindrunning)

Actor Milind Soman has been a fitness icon for decades now. The model has been always vocal about his belief in a simple and healthy lifestyle and Yoga tops the list of his healthy practices. So it is no surprise that in his recent post, Milind Soman is seen performing Surya Namaskars with his wife Ankita Konwar. The couple is seen performing Yoga in a lush green area in the clip. Sharing the video, the 55-year-old wrote in the caption, “Green is my favourite colour. We are trying to sync our different interpretations of Surya Namaskars but I have been doing 30 Surya namaskars every morning which takes around 7min and feels fantastic.”

The actor further jotted down the benefits of this Yoga routine. Milind Soman explained that Surya Namaskars were the “best, low intensity, simple movement to improve and maintain basic strength, joint mobility, balance and focus.” Replying to the post, Ankita said, “Everything is so much more fun with you.” Cute, isn’t it?

In a previous post, Milind Soman emphasized the importance of staying consistent with exercising. The veteran model is seen running in the image. In the post, Milind wrote about finding time to work out despite a night-time shoot. He wrote, “Running in the rain to a shoot that starts at 7 PM and ends at 7 AM.” He added, “Sleeping a few hours during the day… that’s what I’ve been doing the whole week. People complain that night shifts make it difficult to live a healthy life, and it’s so true, but if I have decided to find those few minutes for myself, then I must make every effort.”

Milind Soman’s wife Ankita Konwar is just as enthusiastic about fitness as her husband. The duo is often seen enjoying their time together by doing some productive workouts. In one of the posts shared by the star, the couple is seen running. An excerpt of his Instagram caption reads, “Happiness is doing the things you love, together. Well, that’s for me, and happiness is a lot of things to a lot of people.”

Milind Soman rose to fame after featuring in Alisha Chinai’s music video Made In India. He featured in films like December 16, Bheja Fry, Jodi Breakers, and Bajirao Mastani among others.