Plot: A new couple and their families find themselves examining modern love and family dynamics amidst clashing cultures, societal expectations and generational differences in this comedy from Kenya Barris.

Review: Last year, Kenya Barris wrote Disney’s remake of Cheaper By The Dozen, updating the family dynamic to be a multi-ethnic brood including stepchildren and half-siblings. The comedy didn’t strike quite the same chord as Barris’ successful sitcom black-ish, but it did showcase the changing look of what 21st-century families look like. Now, Barris’ feature directorial debut, You People, takes a more mature look at race and anti-semitism from a humorous vantage. With Jonah Hill and Eddie Murphy taking top-billing, You People is a sweetly funny update of Guess Who’s Coming To Dinner? for the next generation, even though it is not a direct remake of that classic film. Full of comedy and genuine romance, You People works well but is not nearly as bitingly satirical as it could have been.

What works in You People far outweighs what doesn’t and is led by the excellent lead turn from Jonah Hill. As Ezra Cohen, Hill delivers one of his more subdued comedic performances by relying on his timing and delivery more than the broader humor of his earlier films. On the heels of his Netflix documentary Stutz, Hill shows off his tattoos and slicked-back dyed-blonde hair as a broker and up-and-coming podcaster who falls in love with Amira Mohammed (Lauren London). The two come from very different backgrounds but fall in love and decide to get married. That is when their parents come into the picture and define the generational and cultural gaps between the young lovers. The chemistry between Hill and London is easy-going, and you absolutely buy the pair as a couple. Their scenes are amongst the cutest in the whole movie. But, the heavyweights come to play when their parents are on screen.

David Duchovny and Julia Louis-Dreyfus play Ezra’s parents as liberal, wealthy Jewish residents of Los Angeles. Shelley is an excellent character for Louis-Dreyfus, who has been having quite the run in recent years. She plays Shelley as a loving parent who cannot help but get in her way when cultures clash. Duchovny is solid in a somewhat understated role as Arnold, the square father who cannot help but embarrass himself when he quotes pop culture he thinks is still relevant. On the other side, Amira’s parents are played by Nia Long and Eddie Murphy. Murphy plays Akbar Mohammad as a Muslim man who questions black culture, appropriation by white people, and even things like the COVID-19 vaccine. Murphy is a comedy genius and gives a very restrained performance, one of the better funny roles he has done in a long time. Eschewing mugging for the camera and prosthetics for a genuine perspective, Murphy makes Akbar a realistic dad and a challenging future in-law.

As the film progresses, the struggle to bridge their two families becomes a roadblock for Ezra and Amira. The film deviates into traditional rom-com territory as the wedding planning goes into full effect as we meet Becca (Andrea Savage), the wedding planner, and Amira’s uncle Demetrius (Deon Cole), a competing party planner. There is the requisite bachelor party, and bridal shower shenanigans as everything leads towards the big day. There are solid supporting performances throughout, especially from Sam Jay as Mo, Ezra’s podcast co-host, as Ezra and Amira try to figure out how to move forward together despite their families. But, try as they might, the couple’s hilarious path deviates from the biting humor in the first ninety minutes of the film for a more formulaic final act that, while still funny, plays it far safer than I expected.

Still, Kenya Barris’ directorial debut works well because it puts solid actors into roles you would not expect. We should not be surprised that Eddie Murphy and Jonah Hill, two actors known for their comedy and who have showcased dramatic and Oscar-worthy abilities, imbue these characters with depth and realism. Barris brought racial conversations to the forefront of his small-screen series, but in You People, the conversation never goes deeper than a surface-level conversation. What Barris does do very well is make Los Angeles into a character all its own, making You People into a love letter to the city, similar to how Damien Chazelle immortalized it in La La Land. Every scene transition is done in a way that highlights locales, landmarks, and Barris’ favorite spots while showcasing the modern black culture all over the metropolitan area.

You People resonates as a more robust look at race and religion in modern multicultural America than many films while still keeping things fun. You People wants badly to strike a chord with Millennials and younger audiences, but I think this movie is going to click more with viewers in the age range of the parents. Barris has long been adept at telling solid stories with a message but still palatable for mainstream audiences, and this is no exception, but it doesn’t quite stick the landing as it plays it safe at the end. Regardless, the trailers are honest about the tone and humor in this film and do not give away the funnier moments from the two-hour movie. I had a good time with You People, especially Jonah Hill’s and Eddie Murphy’s excellent work. Kenya Barris makes a strong case for any project he plans to direct next, and I hope it is just as balanced as this one. 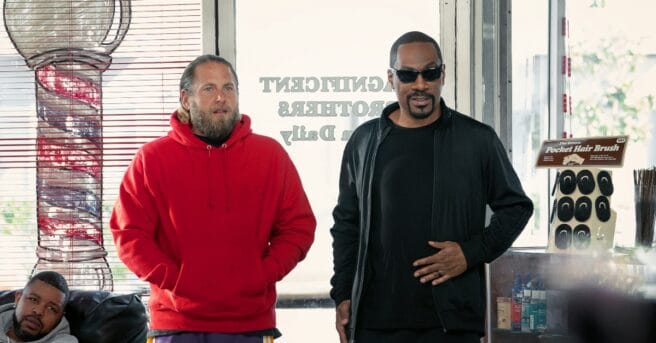 Kevin Bacon “waiting for the call” for another Tremors movie